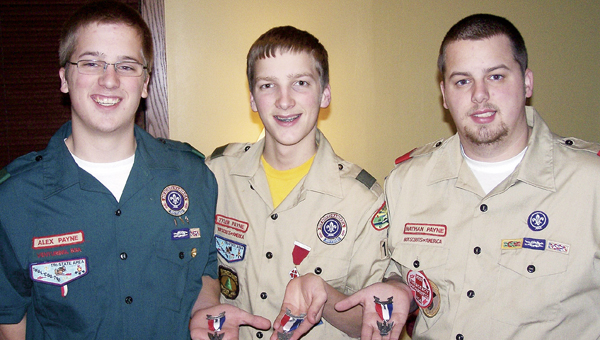 From left, Brothers Alex, Tyler and Nathan Payne have each earned the highest honor of Boy Scouts, the Eagle Scout.

SOUTH POINT — Allen Payne is now a proud father of a whole nest of eagles – Eagle Scouts, that is. His sons Nathan, Alex and Tyler have each earned that honor through the Boy Scouts of America program.

Tyler, 15, is the newest of the three, earning his rank in 2010. He was honored in a ceremony this past Tuesday in Barboursville, W.Va., for all Eagle Scouts of 2010.

The family first got involved in Boy Scouts in 1995, when Nathan was first interested. Allen Payne thought it was a good idea.

“I wasn’t really into sports, so I thought, ‘Why not?’ I was in scouts as a kid for a couple of years, but I didn’t do much with it. I do remember having fun,” Payne said.

The family stuck with it and, one by one, each of the Payne boys developed a love for scouting.

“I think it brought us closer together,” Payne said. “We spend an awful lot of time together sleeping on the ground. You get pretty close to somebody doing that.”

He added that they did a lot of activities together through the Boy Scouts that they might not have done on their own.

Nathan, now 22, and Alex, now 18, agreed the bonding of their family was a major benefit of scouting, and had a few more reasons why they loved it, and still do.

“Everything you learn makes you a better citizen and teaches you stuff you wouldn’t learn at other places,” Nathan said.

Alex said his father’s involvement in scouting meant a lot to him.

“It’s a really big part of scouting, making sure you have a father figure there. It wouldn’t be as fun if your dad just dropped you off and left. With all the learning, he is there to help,” Alex said. “You want to be like your dad.”

“It teaches you to be prepared,” Nathan said. “That’s one of the lessons, the older I get, the more thankful I am.”

“It’s taught me to be a man, a good guy,” Alex said. “A lot of morals and things people should know sometimes, scouting strives to make sure you get them.”

While Allen Payne said Tyler is shy and wouldn’t want to be interviewed, Alex spoke of Tyler’s accomplishment.

Both Alex and Nathan plan to stay involved with Boy Scouts and to make sure their future children are presented with the opportunities Boy Scouts provides.

Allen Payne couldn’t be happier for his sons.

“I’m very proud of them,” he said. “They worked hard to get what they got. They had a lot of fun too. They spent a lot of time. I have guided and mentored them along the way, but they’ve done it all.”