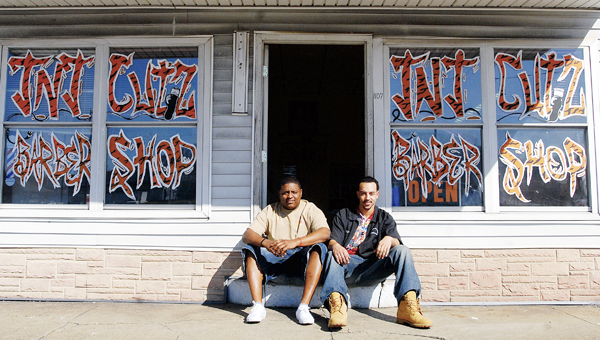 They may be young, but the owner and employee of one of Ironton’s newest businesses is not letting that stop them.

Antonio Murphy, 20, and Antonio Keith, 21, are the owner and head barber/manager respectively of TNT Cutz, which opened recently at 1107 S. Third St.

“I want to let people know that even though you’re young and you have dreams and goals, that doesn’t mean you can’t pursue them,” Murphy said. “You never know how it’s going to turn out until you try.”

The business is located in the barbershop that longtime Ironton barber Pete Davenport used beginning in 1989. Davenport died last summer after a battle with cancer. The two didn’t know him.

“We still show him a little love. We left his sign up there,” Murphy said, referring to a sign outside the building.

But the inside of the shop looks a little different these days. Framed newspaper stories of Ironton High School athletics, Fighting Tiger helmets and awards cover the walls. On the business’s front windows, its name is written in orange lettering with black tiger stripes. All of this is the pair’s homage to their hometown and their alma mater, where they both played sports.

“People always say if you graduate from Ironton and don’t go to college you’re not going to be nothing if you don’t leave,” Murphy said. “I think you can make it in Ironton. You just got to try.”

“This is something that I’ve wanted to do since I was younger,” Keith said. “I’ve always liked the atmosphere in a barbershop.”

While some might guess that it would be intimating to start a business during tough economic times. Murphy isn’t worried.

“It really doesn’t scare me,” he said. “I know people will spend money to look good.”

Murphy added that there are not many black barbers in the area and he hoped to fill that need.

“A lot of black people don’t go to white barbers,” he said. “People go to Huntington from Portsmouth just to get their hair cut.”

But Keith isn’t particular about the types of hair he cuts.