RH students give out smoke detectors 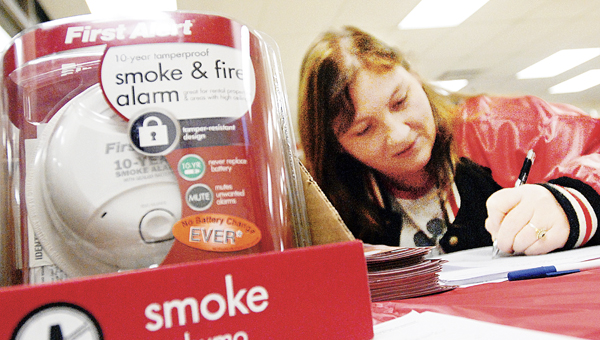 Rebecca Cooper, of Pedro, signs up for a free smoke alarm at the Rock Hill Middle School Thursday evening. The smoke alarms were given out by the National Junior Honor Society and the Elizabeth Township Volunteer Fire Department. THE TRIBUNE/JESSICA ST JAMES

With the help of some Rock Hill Middle School students, several families will sleep a little safer. At least that was the goal of a service project by the school’s National Junior Honor Society.

The students purchased 20 smoke detectors and gave them out to parents during parent-teacher conferences Thursday evening.

The focus of the project is to help to reverse a troubling trend in Lawrence County. Last year the county led the state in the number of per capita fire-related deaths.

“We thought it was important to our community to find some way to help out,” Mitchell Jenkins, an eighth-grade member of the junior honor society, said. “We hope our project can help our community out in many ways.”

To raise the $400 for the detectors, the students raffled a basket of Ohio State gear. Each year the students a service project. The smoke detectors were chosen around the same time it was reported last year that Lawrence County had a high number of fire fatalities, Denise Fraley, the group’s advisor, said.

The fire marshal’s office has been working with local fire departments to see that the number of fatal fires is reduced, Corwin said. So far this year, there have been 25 fire-related deaths in Ohio. It will take time to know if the number in Lawrence County is decreasing, he added.

Waugh said many Lawrence County residents have taken it upon themselves to become more fire safe. For instance, Waugh has received calls from people asking what size fire extinguisher to purchase, he said. In the last month, the department has given out close to 24 fire detectors. Waugh said an October fire that claimed the lives of five people in Pedro changed the way people in the township think about fire safety.

Besides the 20 smoke detectors that the students purchased, the Elizabeth Township Fire Department provided six of their own. Parents could also sign up to receive one, if the supply at the school ran out.

One of the parents who took advantage of the project was Milton Depriest. Depriest said he did not have a working smoke detector in his home.