MATHCOUNTS competition adds up to success for SV 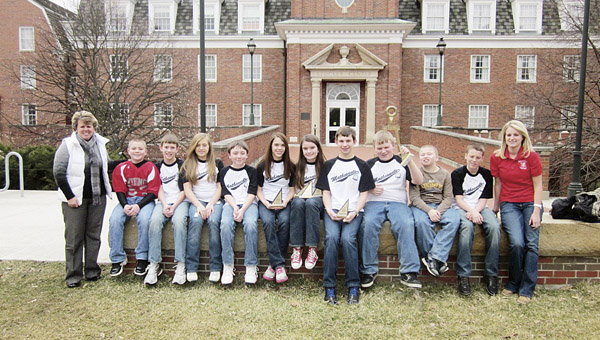 WILLOW WOOD — The Symmes Valley MATHCOUNTS team of middle school students competed regionally Saturday at the Russ College of Engineering and Technology at the Athens campus of Ohio University.

The team placed 4th overall out of 19 teams, a total of 120 students. One of the students, seventh grader Felicity Jenkins, will move on to the state level in Columbus on March 12, along with three other students chosen, as well as the top two teams.

Bowling said the students have been staying after school to practice and were very prepared.

“I feel math is such an important field for both boys and girls to enjoy,” she said.

Felicity is also proud of how the Symmes Valley students did.

“We were up against a lot of big schools,” she said. “It’s a major accomplishment. It was pretty challenging.”

Felicity said for the first part of the competition Saturday, the students were given 30 problems with 40 minutes to complete them, with no calculators.

The second round consisted of eight questions, given two at a time, with six minutes for each set of two questions to answer. Calculators were allowed for the second round.

The team round followed that. The top four students from each school were chosen to represent the school in the team round. Felicity along with seventh grader Tanner Shepherd, seventh grader Colin Lybrand and eighth grader Elly Fulks represented Symmes Valley. They were given 20 minutes to complete 10 problems, working together with calculators.

After the team round, the top 12 students from the first two rounds were chosen for the countdown round, where students competed one-on-one.

Felicity is thankful for the work the coaches put into helping them prepare.

“They taught us to do things I didn’t know how to do before,” she said. Felicity said they started practicing around November or December and would practice toward the end of the school day. After January, they spent more time and stayed after school to prepare.

While this was her first year competing in the MATHCOUNTS competition, she is hopeful it won’t be her last.

The Wayne National Forest’s Oak Hill Campground in Lawrence County has received a makeover that was completed in plenty of... read more