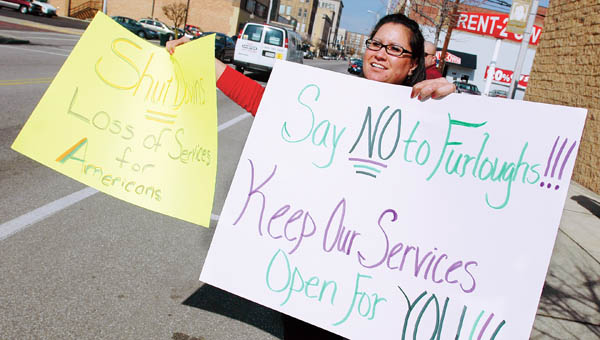 Jennifer Wilcoxon works to get the message out as she and other co-workers give an informational protest Wednesday outside the Social Security Administration building in downtown Ironton.

“Say No to Furloughs – Keep Our Services Open to you” and “Shutdowns – Loss of Services for Americans” are some of the messages motorists saw when they drove along Third Street in Ironton during lunchtime Wednesday.

While the exact dollar amount for the budget cuts is not yet decided, a proposal by House Republicans would cut funding for the Social Security Administration. The proposed GOP spending bill would reduce the SSA’s administrative budget by $125 million. It would also reclaim $500 million from a  “reserve” fund and eliminate $118 million from a computer center not scheduled to be built until 2015. The widely reported $1.7 billion cut touted by Democrats is the difference between Obama’s proposed budget for 2011 and the Republican bill.

One way to compensate for the cut would be furloughs for employees – required time off without pay, with the number of days depending on the final amount of the budget cut.

Rick Hanna, vice president of Local 3448 labor management, said he doesn’t see any way around a furlough if the budget is cut.

“About the only way they can cut off Social Security is to cut off the personnel aspect of it,” Hanna said.

Jennifer Park, union representative, said she wanted people to know that even though the cuts would happen with employees, the public would be affected.

“It hurts everyone,” she said. “Longer waiting times. Phone calls don’t get answered. Claims do not get paid.”

Park said the staffing in the Ironton office is small anyway, and if employees are forced to take time off, their work will remain on their desks until they return.

“We know it’s going to hit us somehow, it’s just a question of how hard,” Hanna said.

Park said the message she wants to send out to the public is that if they disagree with cuts in public service to contact their congressman while they are still working on a budget.

Pending President Barack Obama’s signature, legislators will have until March 18 to finalize a budget before a government shutdown would happen.

“Congressman Johnson pledged to bring Ohio common sense to Washington and one of the most important ways to do that is to start getting the reckless government spending under control.

“Those who support the status quo oppose this, but Congressman Johnson pledged to find significant savings in the budget. Most recently, House Republicans took an important first step by cutting $4 billion from the government in their effort to bring some long-needed fiscal sanity and discipline to Washington.”

A man who robbed an Ironton bank will spend the next eight years in prison for the crime. Talmadge M.... read more