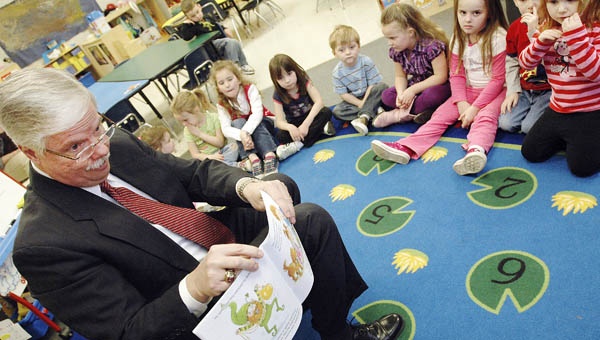 As he read the story about two children and their quest to catch a leprechaun, the children of Chrissy Wilson’s class sat in a semicircle around him attentively, answering questions and ending it with students running to him giving him a group hug.

Gianna Pemberton, 5, said she liked that the book had lots of pictures, but that her favorite books are about princesses.

Cameron Sarver, 4, said his favorite books are about deer.

“I just decided to do it this year,” she said. “The kids go to the library and read a book, but to have someone from the community come and read, it’s very important to the kids.”

She said it is also a good way for the students to become familiar with the people in the community.

Payne was glad he was able to be a guest reader. Being the superintendent of Symmes Valley for six years, he has a lot of memories from his time there.

“I was asked to come and read to the students and promote reading to the children,” he said. “I was honored that they would be willing to have me.

“Highlighting it makes it fun for them and they learn at the same time,” he said.

Payne said reading is important for the students in many ways.

“It’s the building block, the foundation, they will be able to use in any activity they’re in,” Payne said. “It’s imperative they get off to a good start.”

Lawrence County homeowners have two more weeks to file a complaint if they disagree with the recent re-evaluation of their... read more