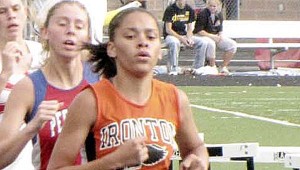 It’s time for the start of the track season and the Ironton boys’ and girls’ invitational meets will usher in a new year.

The Ironton girls’ meet begins at 5 p.m. Friday while the boys’ meet gets underway at 11 a.m. on Saturday.

In the girls’ meet, Ironton coach Tim Thomas said there will be some young talent but veterans like South Point sprinter Kayla Fletcher and Wheelersburg hurdler Sadie Ruby are the main standouts.

Ironton has only one senior — standout distance runner Taylor Hacker — but she will not run due to a medical emergency in the family.

“We’re really young, but I think we’ll get better. But this early in the season we’re kind of thin because of various things,” said Thomas.

Some runners are missing due to the Spanish class’ trip to Costa Rica. Workouts have also been limited due to team members who were involved in the school play.

On the boys’ side, Ironton coach Greg Cronacher said three teams figure to challenge for the meet championship: Gallipolis, Wheelersburg and Fairland.

“Gallipolis won the district last year and they have some sprinters,” said Cronacher. “Fairland has a lot of runners back and Wheelersburg has some sprinters.”

Ironton was hurt by graduation and will be missing distance runner Gary Monroe who was eighth in the state 800 meter run last year. Monroe is expected back next week.

“We still have runners like Pierce Reeves, Adam Stumbo and Dusty Moritz and sprinter Tres Wilks, but we’re kind of thin after that,” said Cronacher.

The Associated Press CINCINNATI — The Brewers got off to a powerful start, and the defending NL Central champions had... read more