An Ironton man was killed in a head-on collision on County Road 103 Wednesday afternoon.

Richard E. Schwab II, 44, died in the two-vehicle car accident, which happened around 3:46 p.m. about a mile north of Porter Gap Road and three miles north of Ironton, according to a release from the Ohio State Highway Patrol.

Troopers determined that the two vehicles were traveling in opposite directions and had struck in the middle of the roadway. Schwab was driving southbound. Charles A. Allen, 32, of Ironton, drove the northbound vehicle. Allen and his passenger, Carolyn Allen, were transported to St. Mary’s Medical Center for treatment. Two juvenile passengers who were in Schwab’s vehicle were transported to Cabell Huntington Hospital for their injuries. 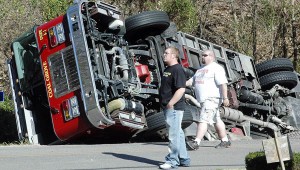 A Coal Grove fire truck is seen flipped over on its side Wednesday afternoon on Porter Gap road. Firefighters were on their way to a fatal accident..

While on the way to provide mutual aid for the accident, two Coal Grove Volunteer firefighters were involved in a rollover accident Mayor Larry McDaniel said. The firefighters were driving a fire truck on Porter Gap Road when the truck sideswiped a car and rolled into a ditch.

The two firefighters were taken to a hospital for evaluation.

A man driving the car had to have stitches, the mayor said.

The fire truck sustained damage to its side and a broken windshield. McDaniel said he has not seen the truck yet but that Fire Chief Gary Sherman told him he thinks it can be repaired.

“I’m just glad no one got seriously hurt because it was a pretty bad accident,” McDaniel said.

SOUTH POINT — The investigation continues into a bomb scare that put a South Point neighborhood into voluntary evacuation in... read more