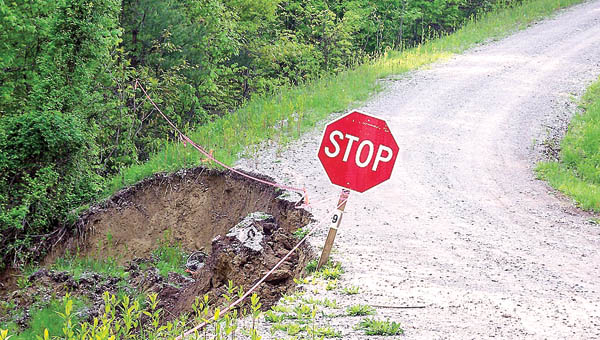 A landslide has forced the closure of Forest Service Road 132 on Wayne National Forest property near Pedro.

Carol Boll, assistant district ranger, said the slip was first noticed a couple of weeks ago.

“April 25, we noticed an inch or two drop, and by the time we are closing it, it is 5 to 7 feet. It was going fast and we didn’t want anyone to go with it,” Boll said.

Boll said there were no injuries.

“We just want the public to understand it’s closed,” Boll said. “A lot of people use it to go from one road to another, as a shortcut. We don’t want anyone to have plans and be surprised when they get there.”

The road connects Howard Ridge Road with County Road 2. Those who use the road can still get to their destination, but it will be about four miles out of their way, Boll said. She added that the road is also used by people who are turkey hunting, backpacking and mushroom hunting.

The road is expected to be closed anywhere from 18 to 24 months. Boll said it’s the same process they are going through to repair the bridge on County Road 29.

“It’s kind of the same funds for that,” Boll said. “It takes about a year to get the funds, and then time to do design and then repair. It’s about a two-year process.”

Boll said the work to replace the bridge on County Road 29 is still in progress.

“We got the money and have the designs worked on,” Boll said. “We are close to getting the contracts out for bid. The plans are to be working on replacing the bridge this summer. The process is moving.”

Future of transportation to be discussed at meeting

Whether you work in a transportation industry or just travel through the Tri-State, the KYOVA Interstate Planning Commission wants your... read more