Cleaning up the morning after 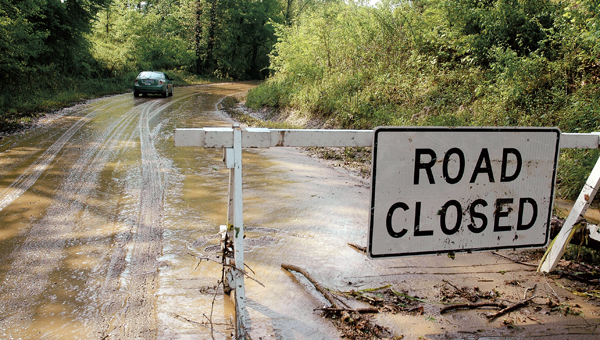 A “road closed” sign sits off to the side of County Road 181 while a car makes its way through Wednesday morning. Residents who live along County Road 181 said soon after it started raining Tuesday evening, the road had washed out, making travel impossible.

The rain came down fast and furious Tuesday evening, leaving the community to deal with the aftermath.

The Lawrence County Emergency Management Agency wants anyone with damages from the storm to contact them.

“We are just getting started in damage assessment,” Boster said. He said reporting all damage in the area helps in determining the type and amount of aid the area can receive.

“We want to try to help as many people as we can,” Boster said. “It helps in the future too to plan for where we need to focus mitigation funds, coming up with projects in the future to help people out.”

Early estimates were that three inches of rain fell in eight hours, causing flooding, road closures and power outages. Emergency workers were out in full force, assisting in whatever areas they could.

“The phone was pretty busy at the 911 center. They had a tremendous volume of calls,” said Boster. Boster said the 911 director told him there were anywhere from five to seven lines occupied at the same time.

Boster said there were three structure fires in the area at the time, with flooding making it difficult to reach them. Fire departments were also assisting with water rescues, vehicles stranded in water and people being rescued from their homes. Boster estimated 200 emergency workers were assisting across the county.

Sheriff Jeff Lawless said flooding on Solida Road in South Point caused the basement wall of a house to collapse. Boster said the Red Cross was able to provide a temporary shelter for the family.

Lawless said there were two other water rescues on Ben Howell Road. Those residents will be staying with family and friends.

The sheriff said he was pleased with how the emergency responders reacted.

“I think everyone did an excellent job with what was going on,” Lawless said. “The elements are something we have no control over and we are at the mercy of whatever the storm wants to do and you clean up afterward.”

Lawless said the storm’s impact was substantial, with damages being sporadic throughout the county.

Rock Hill and Chesapeake school districts were on a two-hour delay Wednesday morning, due to high water and debris.

John Hayes, director of business affairs with Chesapeake schools, said students from all district routes were reached Wednesday, except for one subdivision,

“We had a culvert washed out at Lamar subdivision preventing us from getting the kids,” Hayes said.

Rock Hill School District had several roads still impassable Wednesday morning, including County Road 45 and Township Road 160, along with others.

Wednesday morning, American Electric Power reported more than 1,200 customers still without power, but by the afternoon. power had been restored to all but 153 customers.

An AEP representative said Tuesday evening, about 12,000 Tri-State residents were without power. He said the power outages can be caused from wind and rain, but also from utility poles being loosened from all the water.

“Basically, it ended up being pretty substantial,” Lawless said. “People are trying to recover today.”

If the deluge that hit the Tri-State looked bad early Tuesday evening, it didn’t get any better at 1 a.m.... read more