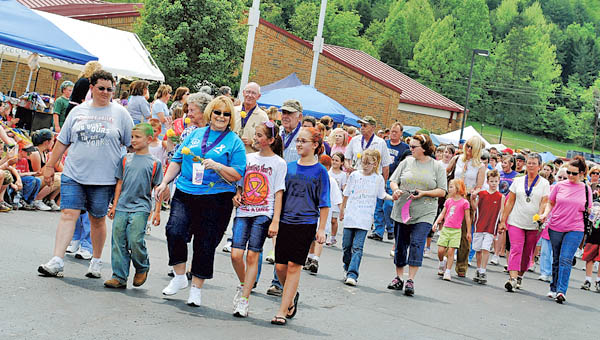 With applause and cheers from students, staff and visitors, cancer survivors from the community complete the survivors’ lap.

WILLOW WOOD — The Symmes Valley Relay for Life Day, both at the high school and elementary and junior high school, gave students a day to ditch the books, while learning something more important than a text book can teach — giving.

The annual event was a culmination of the hard work the students and staff have put in to raise money for the American Cancer Society’s Relay for Life.

This is the fifth year the high school has participated, and the elementary school has been doing it for six years. Early estimates of more than $24,000 raised this year are above what they had hoped.

Money was raised during Friday’s event by booths selling cookies, brownies, bracelets, candy, drinks and a chance to smear pies on the face of a teacher or a principal. In addition, the high school also had a corn hole tournament and a basketball tournament, and the elementary and junior high school was offering face painting and nail painting to raise cash.

But a good amount of the money was raised by students before the event. Heath Wade, sixth grader, said he began working about a month ago, going door to door for donations and mowing yards to raise money. Other students have had bake sales and car washes and sold snow cones.

Bryant said an event like this is important because everybody has been touched by cancer in some way.

Kayla Smith, senior, can relate all to well.

“It’s important to me,” Kayla said of the event. “My dad died of cancer when I was 11. It feels good to know we can help as many people as we possibly can.”

“Everyone needs to have hope for the people who have cancer,” said Megan Price, sophomore.

Bowling said she is thankful for the support the community and local businesses have shown the school and the cause.

Amy Brady, mother of third grader Sammie Brady and kindergartner Paden Brady, was helping out by selling some jewelry.

“We are selling earrings made by myself and by Sammie in memory of my mom,” Brady said. Amy said her mother, Brenda Morris, died from cancer this past November. Brady said her mother had walked in previous Relay for Life events with her.

Eighth grader Travis Artrip’s life has also been impacted by cancer. His father, Paul Artrip, has had four or five different types of cancers.

“I hope they find a cure for him,” he added.

Some additional highlights of the event include a helicopter ride by Healthnet for the elementary and junior high students who raised the most money, and a tricycle race by high school students. The relay took place the entire school day, with a member of each team represented on the track at all time.

The event also included a survivor luncheon, for any cancer survivors in the community, followed by the survivors’ walk. Nearly 50 cancer survivors and their families were cheered on and applauded as they circled the lap, survivors carrying yellow roses.

“The survivors lap is the most important reason why we’re here,” Ferguson said.

The high school team with the most points and money raised will represent Symmes Valley at the Relay for Life event Friday in Chesapeake.

“Our hope as students and a school is to find a cure for cancer in our lifetime,” said Bowling.