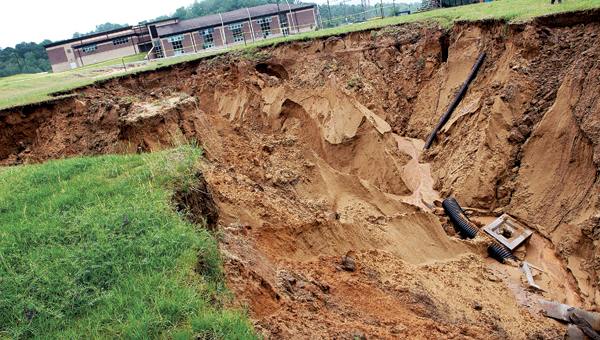 SOUTH POINT — Heavy rain wreaked havoc on Lawrence County last week, not caring where it fell or what damage followed.

South Point High School and Middle School property felt the pain that came from the downpour, resulting in land slippage on the high school side of the property.

A section of the retaining wall washed out at the base of the location of the future baseball field. Farther down the property, near the shot put range and just above the football field, is a hole, estimated at 75 feet in length and 50 feet across, and an estimated 30 feet deep.

The school was built four years ago, and Superintendent Ken Cook attributes the newness of the land to the problem.

The area is marked off with caution tape to deter anyone from getting too close, and, as a safety precaution, the shot put area is not being used.

Cook said the contractor in charge of the construction of the school was supposed to look at the property Tuesday to determine what should be done.

“Those people are responsible for their work,” Cook said. “They’re bonded.”

Cook said it will likely be fixed by filling the hole and stabilizing it, though he added he couldn’t speak for the contractor.

“We’re going to make sure the problem is taken care of,” Cook said.

THE TRIBUNE/JESSICA ST JAMES South Point resident Juanita Meadows is congratulated by friends after being named “Senior Citizen of the... read more