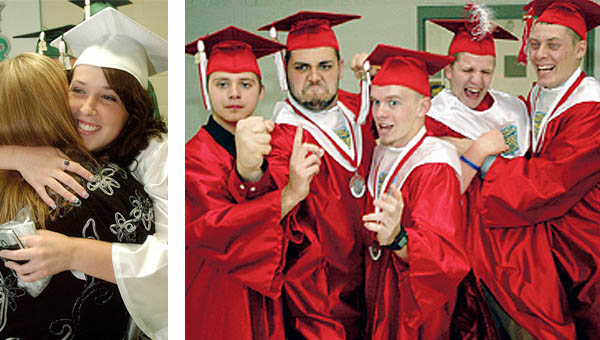 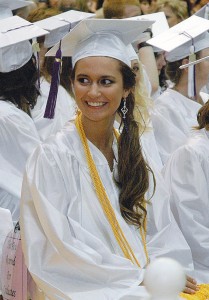 PROCTORVILLE — For the members of the 2011 Fairland High School graduating class, Friday evening’s ceremony could be described as both an end and a beginning.

It was the end of their high school careers but the beginning of all that lies ahead of them.

“It’s something you think you always want to happen then you worry if you’re ready,” Early said. “But you are.”

“(We’ll be remembered) for being very eclectic,” she said. “We’re very, very unique and surprisingly we get along.”

“I was nervous when I got to the school,” Carpenter said. “The rest of the day was kind of boring but now I’m like, ‘Oh my gosh.’”

Whitney Adkins, a graduate who plans to study radiology, said she was excited and battling some nerves about walking across the stage in front of a crowd. She said she was anticipating missing her high school days.

Tracie Hatfield, the mother of graduate Karena Hatfield, described the emotions of the day.

Senior English teacher Tara Sansom taught about 80 of the seniors and was sad to see them go.

“They’re quirky and unique and full of personality and we’ll miss them everyday,” she said.

PEDRO — Joseph Gillispie and Joshua Reaper stood outside the gymnasium of their school Saturday evening. Wearing their red caps and gowns, the two friends waited for their commencement ceremony to begin.

“I’m excited,” Reaper said. “I’m finally getting out of here. Moving up in the world.”

For Gillespie, the thought of graduating brought out some nerves, mostly for the ceremony itself.

“I have to walk in front of a bunch of people,” he said.

Amidst the excitement of the day there was sadness, too, over a friend who would have graduated but died before his time.

Adam Kuehne was killed in a car accident in February.

“We’ve been through a lot,” Gillispie said of his class. “Adam was a close personal friend of ours.”

The two say their class will be remembered for its friendliness.

“Everyone that I know personally would do anything for you,” Reaper said.

Principal Steve Lambert spoke of the school year’s tragedies. Besides Kuehne’s death, another student, Jonathan Schwab, lost his father in a car accident. Schwab was the honor speaker at the ceremony.

Lambert said, though it has been a difficult school year, he will have fond memories of class members. They have great attitudes and discipline, he said.

“These kids had a lot of special moments in school and they confronted hardships,” Lambert said. “It’s been a tough thing. It’s hard for kids to understand why these things happen.”

The unique thing about the class, he said, is the way the students have dealt with the tragedies. They have a trust in and focus on God, he said.

“I think they’re going to have a lot of successes in life,” Lambert said.

Eighty-two students said farewell to high school and hello to adulthood in a sea of purple and white Saturday night at Chesapeake High School’s graduation ceremony. The change was met with mixed emotions, by both the class of 2011 and their parents.

“It’s awesome,” said senior Jamie Pelfrey. “But I love Chesapeake. I’m going to miss it. There was never a dull moment.”

Jamie plans on going to Hawking Technical College to study to be a park ranger.

Colin Kennedy will be going to Shawnee State University to play sports and will major in physical therapy.

“I’m excited,” Colin said. He added he will miss hanging out with his friends and the lighter workload he experienced in high school than what he expects in college.

Karen Hagan, mother of senior Stephen Hagan who is the last of her five children to graduate, said she is experiencing mixed emotions.

“I’m proud, but it’s kind of sad because he is the last one,” Hagan said.

“I hope he continues his walk with God and continues to find happiness and goes exactly where God intends for him to go.”

Stephen plans to start Marshall University in the fall to study nursing.

Julie Smith, mother of senior Brandi Burress, is excited for her daughter, but in some ways, a little sad.

She shared her hopes for Brandi.

“Just for her to go as far as she can in school and in life.”

Principal Joseph Rase had great things to say about the graduating class.

“A good class,” Rase said. “No problems. There was a lot of leadership in this class.”

He added that this class will be missed.

Rase had some words of advice for the class of 2011.

“If you work hard in life, good things will happen.”

Ro-Na event to be held Monday

Lori Heaberlin works on some decorative painting on the stage area of the Ro-Na Theatre Thursday. With its concrete floors,... read more