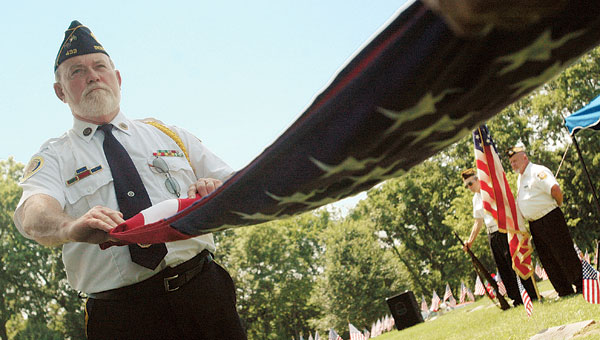 It is a simple, solemn, yearly reminder that freedom isn’t free.

Sunday afternoon, the faithful gathered in the soldier’s section of Woodland Cemetery for the annual Veterans Memorial Service.

In his opening remarks, master of ceremonies Mark McCown noted that “the (Memorial Day) parade is a joyous celebration of freedom, but today is a day of remembrance” for those who gathered among the tombstones and flags to honor those who have given their lives in defense of our freedoms.

Col. Scott Vanderhoof, United States Air Force, one of two speakers for the service, noted that over the years 1.3 million men and women have died in our nation’s wars.

“Although we can’t repay the debt, we can and must remember them,” he said.

Vanderhoof paid tribute to U.S. Army Ranger Sgt. Justin Allen, the Coal Grove native who was killed last year fighting in Afghanistan. Vanderhoof said while Allen knew the danger of the war in Afghanistan — the tour of duty during which he was killed was his fourth — he went anyway.

Vanderhoof paid tribute as well to those who have lost their lives in battles throughout our nation’s history, from the American Revolution to the wars in Iraq and Afghanistan.

A native of Coal Grove, Vanderhoof is serving as deputy director of communications at Langley Air Force Base in Virginia. He has given 26 years of service to his country.

Veterans of Foreign Wars Past State Commander Leon Johnson said those who have served over the years have come from all walks of life, from every corner of the country and every race color and creed, “being unified in spirit and being united for one purpose and one mission.”

He said the veteran deserves not only our gratitude but deserves to be treated with dignity and respect as well.

“Haven’t they earned it?” he asked. 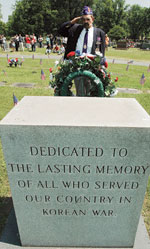 Ron McFann, commander of the Military Order of the Purple Hearts Chapter 765, lays a wreath at the Korean monument during the Veterans Memorial Service Sunday.

The ceremony drew a crowd of approximately 100 people.

One of them was Teresa Pemberton.

“My husband is a veteran and my grandfather. My husband (David) is a member of the (Veterans of Foreign Wars) honor guard,” she explained. “I wish more people would attend but usually we get a good turnout. We need to stop and think of all of those who gave their lives and those who are still serving. It’s because of them that we are able to have this day.”

Singer/musician Herb Rose sang the National Anthem, was joined by the Woods Sisters for “America, The Beautiful” and then played a selection of patriotic tunes on his pennywhistle.

In remarks before his benediction, the Rev. Chad Pemberton noted that those who have served “sacrificed not only for us but for our children’s children.” He said freedom is a continuous battle.

“Freedom,” he said, “is something you never give up on.”