The story of a POW 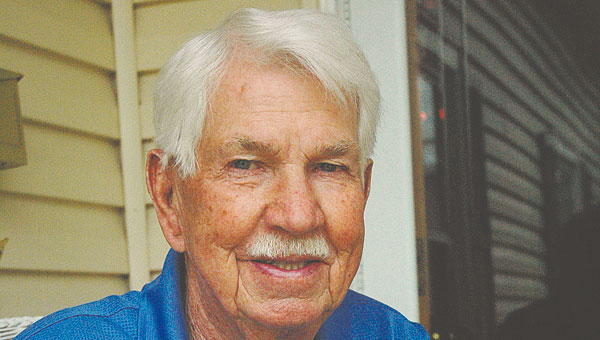 The walls of Bill Washburn’s Buckhorn Street home are full of stories.

A framed picture of Jesus Christ hangs in his living room to the left of the front door, beginning a sequence of photos and paintings that wrap around two walls leading to his 42-inch television, which is tuned in to a golf tournament.

Many of these paintings were brushed by his son, David, including the one of Bill and his beloved late wife, June, who passed away last December following 62 years of matrimony.

Washburn, who has just returned from swatting dimpled white balls at the Ironton Country Club, cuts the volume to the television and begins telling a story that cannot be contained in a frame.

He places a 39-page book on the coffee table with a youthful picture of himself on the cover, American flag in the background, wearing goggles and a jump suit. The title reads “BILL WASHBURN: A World War II POW/MIA.”

It was published, using Washburn’s own notes, by David last year as a Christmas present to his father and the rest of the family.

“Growing up, Dad told (David and his brother, Bill) his POW stories at bed time,” David said. “This (the book) is a keepsake for the family, especially the grandkids who might not hear those stories in the future.”

You see, this 86-year-old retired Ironton firefighter and Purple Heart recipient is a military hero, the reason why we celebrate Memorial Day.

In 1943, shortly after his graduation from Ironton High School, Washburn was drafted into the Army Air Corp (which would eventually become a separate branch called the Air Force).

Less than two years later, on March 3, 1945, he and his B-24 Liberator Bomber crew executed a mission in Austria. This was Washburn’s most memorable, and final, mission as a flight engineer.

“We were bombing Linz (Austria) and having engine trouble, so we got out of formation,” he recalled. “Then we got hit by a German fighter plane.”

As the B-24 lost altitude, Washburn realized that his only chance was to grab his parachute and bail. A few minutes later, he found himself clinging to consciousness while hanging from his straps in a tree.

“I had a hacksaw blade with me, so I managed to cut myself loose,” he said, noting that he scaled the tree to recover his chute to use later for insulation in the deeply snow-covered region.

For two days he wondered where he was and searched in vain for help, while also nursing the wounds he suffered from the collision with the tree and fighting hunger, the snow and bitter cold.

Washburn came across some tracks in the snow and followed them to a spot where he spied human activity.

As he watched the area determining his chances of obtaining food, he nodded off and was awakened by six boys and men (whom he would later learn were Yugoslav residents sympathetic to the Germans) toting axes and guns.

He was taken to a nearby home where other Allied soldiers were being held and provided temporary warmth and nourishment.

But this short-lived sense of security was dashed hours later when he was informed that he was a prisoner of war, a status he would endure for two months.

Washburn recalled that Allied forces dropped leaflets warning the sympathetic Yugoslav nationals that their city, Gospic, would be razed the following day if German forces were not removed from the region. This prompted the German officers to place the American, Australian and Russian POWs in the middle of the main bridge in the region to thwart an Allied attack.

“It was a perfect day for bombing,” he said, noting the weather was clear with maximum visibility. Standing with his fellow prisoners on the machine gun-guarded bridge, he said, “We just started praying.”

And those prayers were answered.

A sudden storm moved into the region, eliminating the possibility of an aerial attack by American and British bombers.

Washburn and his fellow prisoners were tortured by sadistic guards with tactics such as being forced to march barefoot for extended periods of time in the snow and having ammunition fired in their direction.

Fear, he said, was a constant emotion.

He was liberated by British forces on May 8, 1945, and returned to Ironton where he eventually became a captain at the Ironton Fire Department, retiring in 1976. He served as Honorary Grand Marshal for the 133rd Ironton Lawrence County Memorial Day Parade in 2001.

A poem penned by his granddaughter, Katie Washburn, hangs in his den, along with accolades and plaques pronouncing his service to his nation, as well as his home town. It was written on Valentine’s Day in 2008 and is aptly titled “Because of You.”

Because of him, as Katie noted, along with others like him, most Americans are thankful for the ability to make their own choices in life.