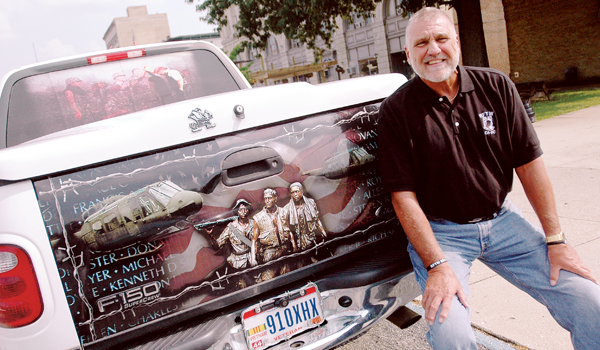 Ted Riedel is seen on the back of his truck that displays the Vietnam Veterans Memorial. Every year during Memorial Day weekend, Riedel rides 6,243 miles from Ironton to California and back to Washington, D.C. THE TRIBUNE JESSICA ST JAMES

For Ted Riedel the Memorial Day weekend means hitting the open roads on his Goldwing Trike.

The route is always the same — 6,243 miles, from Ironton to California, then back to Washington, D.C.

He starts out each morning by 8 a.m. and rides until the sun goes down. But as Riedel quickly points out, this is not a sightseeing adventure. This is a serious journey for Riedel and the 300 bikers who rides with him.

These bikers are making the annual Run for the Wall pilgrimage with a single mission in mind and on their hearts. Their destination is the Vietnam Veterans Memorial, the 70 panels of black granite that bear 58,272 names of those killed in that war.

“The run is a silent protest to keep Washington looking for our MIAs and POWs still listed missing,” he said. “There are still 1,500 missing from Vietnam.”

Vietnam was Riedel’s war, serving in the Air Force from 1970 to 1971 over in Song Be, a one-time province in South Vietnam. Cambodia lay on the north and Ho Chi Minh City on the south.

He spent that year on a small Army air support base and like many Vietnam vets that is all Riedel will say about the tour.

“We really don’t like to talk about it,” he said.

What he will talk about is the sense of awe and healing the Ride for the Wall brings to him and so many other bikers.

“For a lot of these people it is the most comfortable,” Riedel said. “They are around people who have been through the same things. In their daily life, they are suffering from post-traumatic stress syndrome. On this run they are equal with everybody. Some of them save all year long for this. One person doesn’t go out to eat but once a week so he can save money for this.”

It’s a 10-day ride from Rancho Cucamonga in San Bernardino County, Calif., to the Vietnam Wall with stops along the way at elementary schools and VA hospitals.

“When we stop at these schools, people don’t believe 300 rough-looking men coming in and not scaring these kids,” he said. “But we sit down and have lunch with them. … And I think they have learned a lot from us about the wars.”

Along the way when word gets out that the bikers are coming through, well-wishers show up to cheer.

“As we go overhead on the Interstates there will be 10 to 20 people there waving flags,” Riedel said. “When we stop at a gas station, people will come out to welcome and feed us. … To see the tears on these men’s faces when you ride under an underpass and see these people waving flags.”

It was a friend who told Riedel about the ride. That was nine years ago. Now it is part of his life.

“We call ourselves a family,” he said. “You make such good friends. They look forward to seeing them each year.”

And friends have come from a segment of the population Riedel wouldn’t have imagined 40 years ago.