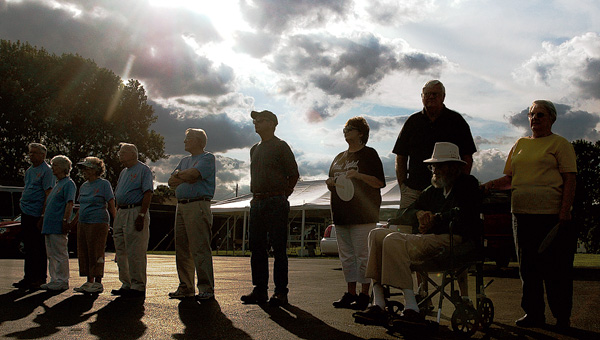 Participants in the first ever Joshua Walk gather in the parking lot of Central Christian Church Wednesday for prayer before taking to the streets.

The faithful were tested Wednesday night as storm clouds turned an evening blue sky black. But still they came, by truck, van or on foot.

This was the fourth night for the Joshua Walk, the church-driven community vigil whose mission is to address social and economic issues through a simultaneous prayer walk around the city. For seven nights starting this past Sunday participants walk a section of the perimeter of Ironton praying from a list that ranges from bringing in new businesses to ending the epidemic of drug addiction.

Each night before the walk, they meet at Central Christian Church to hear words of encouragement from Brent Baker, that church’s pastor. Standing on the roof of the church’s portico, Baker praised the participants below, who joined hands and formed a massive circle around the circumference of the parking lot.

“This is something very, very powerful,” Baker said. “Obedience is waiting to see what God is going to do. We are asking ourselves what is the next step. We have to wait for what God has in store for us.”

Then with the raucous caw that comes from the blowing of a trio of shofars or ram’s horns, they head for their cars to drive to their designated section of town.

The route down South Second Street was where about 20 from Greater Faith Apostolic Church have been marching. It’s a quiet street with a string of small homes lying interspersed among a couple of warehouses, a bar and a carryout.

On Wednesday it was a slight brunette with her hair pulled back in a ponytail who led the group on their walk.

“Lord Jesus, we ask that you remove the drug addiction that is plaguing our community,” she calls out reading from the sheet all carry that lists the walk’s prayer requests.

Silently the group walks on. The only sound comes from the thud of beer cases being loaded into the truck at a local distributorship.

“We pray for homes for the homeless. We pray for the removal of pornography and pornographic addictions,” the leader prays again.

Along the way a woman comes out her front door to sit on the porch. Shyly she nods to the marchers and someone in the group goes up on the porch to give her a copy of the prayer list. They speak for a moment.

On the marchers go.

“Lord Jesus, we pray for the restoration and reconciliation of our families and also pray that they are strengthened,” the leader calls out.

As they near the corner the marchers passed a carry out. A young man in jeans and T-shirt throws a six-pack into the back of his truck. He catcalls out to the group.

The woman who gave up her prayer list asked, “Should I go lay hands on him?”

Another in the group says, “Just let him be.”

At the end of the first leg, they turn to go back down the same streets repeating their litany of requests.

As they go back down South Second, the woman on the porch is intently reading the prayer list. Now she waves to the marchers.

Soon they’re back at their cars, only a half-hour after the walk began.

“We’ll be back tomorrow,” one man promises.

At least two roadway slips in the county will get fixed without using any county funds. Lawrence County Commissioners voted... read more