Another chance to count blessings 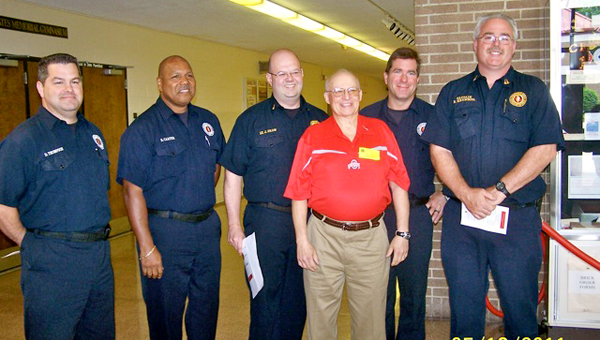 He and his grandson, Tyler Whaley, were off to Columbus to watch the Ohio State Buckeyes, for whom Whaley had been the starting fullback only two seasons prior, battle the Indiana Hoosiers at Ohio Stadium.

Ever since Whaley was a child, he and Tommy, whose birthdays fall one day apart, have celebrated the occasion together.

Conversation over the course of the two-and-a-half hour trip consisted of their usual passionate discussions about football, a former Ironton High School and OSU athlete (also a fullback) named Woody Hall and Whaley’s status as a soon-to-be father.

“It was a great day,” Whaley, 27, recalled, noting that his 68-year-old grandpa was his typical spry self during the trip. “When we were walking toward St. John’s, he was really moving. I was like, ‘hey, slow down!”

Once the duo entered St. John’s Arena, where The OSU Marching Band traditionally performs a pep rally, or “Skull Session,” prior to home games, they stopped to gaze at posted photos of past Buckeye football teams.

Hall was a high school classmate of Tipton’s and 1960 IHS grad who went on to play fullback for the Woody Hayes-led Buckeyes.

Once they found Hall, Whaley’s peripheral vision caught his grandpa quickly moving closer to the photo, presumably for a better view.

“Tyler said my eyes rolled back in my head and I went down,” Tipton said, noting that he has no memory of his collapse or the ensuing chaos.

“He dropped to his knees and fell against a wall,” Whaley recalled, emphasizing that he was thoroughly shocked by the suddenness of the situation. “I didn’t know if he was having a seizure,” he said. “But I knew they had (EMTs), so I just started yelling for help at the top of my lungs.”

Within seconds, an off-duty firefighter was rigorously performing CPR on Tipton. More firefighters quickly joined the scene with a defibrillator to shock his heart back into rhythm.

“It felt like forever, but within 10 minutes they had him off to the hospital,” Whaley said, recalling the timing of the confusing scene, which coincided with the band marching from the arena toward Ohio Stadium.

She was then informed that her husband had suffered a heart-attack. “Your whole life, your past and your future…it all goes before you,” she managed, wiping the tears from her face.

‘I Thought I Just Lost My Grandpa’

Tipton was taken to the Ross Heart Hospital in The Ohio State University Medical Center. Whaley, after making his frantic calls home, did the only thing he could do at the time. “I prayed,” he said. “If it’s your will, God, he’ll survive.”

Tipton had a full blockage of one of his main arteries and was placed on a ventilator in a medically induced coma. Also, a relatively new procedure known as therapeutic hypothermia was put into place.

Therapeutic hypothermia utilizes specialized pads which allow temperature-controlled fluid to flow around a cardiac arrest-victim’s thighs and upper torso, cooling the body to around 90 degrees to prevent further organ damage.

“The doctor said, basically, all we can do is turn it over to God,” Whaley said. “I didn’t know what to expect. There was a chance we might even have to pull the plug.” Even if Tipton survived, there was a great chance he would have extensive brain damage.

Shortly after Dotty arrived at Ross with daughters Angie and Kim, her husband was whisked away for a CT scan. While Whaley and his grandmother prayed, the eerie words “code blue” echoed through the hospital hallways.

“That was me,” Tipton said with a grin, wiping tears away that began moments earlier with Dotty’s recollection of the incident.

Nine crushing days of silence and dreadful speculation passed before the OSU medical team attempted to bring Tipton back to consciousness. “A nurse was screaming in his ear, telling him to wake up,” Dotty said, but her husband wouldn’t budge.

After nearly 50 years of marriage, Dotty knew the exact message to deliver into her workaholic husband’s seemingly unconscious brain.

“I leaned over and yelled, ‘Tommy! Tommy! You have to get up. You’re late for work!’”

“And that’s when he opened his eyes,” she said with a laugh. “I turned to the doctors and nurses and said, ‘He knows who to listen to.”

Seven months, four heart stints and remarkably few side-effects later, on May 19, 2011, Tipton and his family once again found themselves attending a special event in Columbus. This time, however, Tipton was a guest of honor. The event, sponsored by the Columbus Division of Fire, is dubbed the “Cardiac Arrest Survivor Celebration.”

“Only 8 percent of those who have sudden cardiac arrest outside of a hospital survive,” Tipton said, quoting a figure provided by his caretakers at OSU. “When they say you’re a miracle, they mean it.”

At the celebration, the thankful former owner of Tipton’s Foodland & Bakery, who still pulls 40 hour shifts at Sam’s Club in South Point, was able to meet the firefighters who saved his life.

“It was emotional,” he recalled, noting that all of the men responsible for saving his life were extremely humble about their acts of heroism. “When I shook their hands, I could see them glowing inside.”

Whaley and his wife, Brittany, presented Tipton with a new grandchild, Emme Faith, on Oct. 23, the day after he arrived back home. He and Dotty, who has survived three bouts with cancer, have since celebrated their 50th wedding anniversary.

“God has been there for me all the way,” he said while watching his 11-year-old grandson, Brett Leonard, a miracle himself who has suffered through multiple heart surgeries, play with an electric train set in the living room floor.

“As a Christian, death isn’t a scary thing,” he said. “It’s how it would affect your family that’s scary.”

Tipton’s survival and remarkable recovery from almost certain death, thanks to, as he sees it, the divine placement of some very attentive firemen and a relatively obscure procedure, therapeutic hypothermia, isn’t a blessing just to his life.

“My grandpa has always been the foundation of our family; the rock,” Whaley said. “I’m very fortunate to have him in my life.”