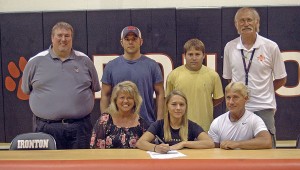 Taylor Hacker likes to run. And evidently, she likes a good challenge as well.

After talking with a number of colleges, the Ironton Lady Fighting Tigers’ senior distance runner elected to sign a letter-of-intent to run for the Division I Morehead State Eagles.

“I didn’t have much competition around here. In college, it’ll be a lot tougher because there will be good competition all the time,” said Hacker. “More competition should make me work harder and help me improve.”

Hacker becomes the third Ironton distance runner to sign with Morehead State and the first female runner. She joins Gary Monroe and Pierce Reeves who will run cross country and track for the boys’ team.

“Morehead is close to home. I didn’t want to go too far from here,” said Hacker. “With Gary and Pierce there I’m really excited about that,” said Hacker who is expected to run the 400, 800 and 1,500-meter races in track.

In cross country, Hacker was the first Ironton female runner to qualify twice for the state meet. She reached the state cross country meet both as a junior and senior.

“Making the state cross country meet my junior year was probably my biggest moment. I wasn’t sure I’d make it and to be one of the first (Ironton female runners) to do it was really cool,” said Hacker.

She was the Division III district cross country champion this past season and her best time is 20:04.

“Cross country is more fun. I like being outdoors and not just running in the same oval like track,” said Hacker. “

“She’s the best distance runner I’ve ever coached,” said Ironton coach Tim Thomas. “We’ve had some good runners and some hard workers, but she’s the most talented and she works hard. She’s an outstanding young lady and she will do well at the next level and in whatever she chooses to do in life.”

Hacker knows she will have to work harder at the next level.

Taylor, the daughter of Joe and Rhonda Hacker of Ironton, plans to major in physical education or physical therapy.

By JIM WALKER Tribune Sports Editor It’s one of the biggest rivalries in the state of Ohio and now it... read more