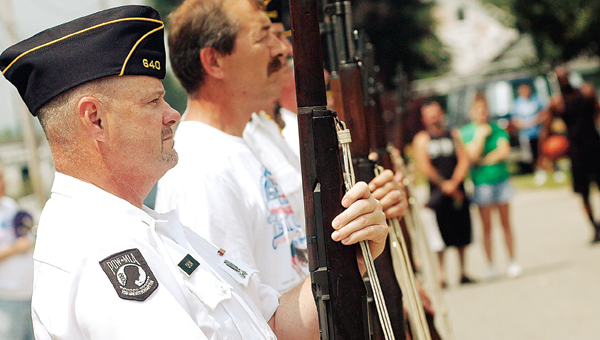 BURLINGTON — A basketball tournament in Burlington was a way to honor the community’s fallen soldiers.

This year 10 teams played in the tournament. Around noon the players and spectators paused for a solemn ceremony to honor the community’s heroes who lost their lives defending freedom.

Organizer Chris Saunders started with a quote from Francis Walker that goes, “We come not to mourn our dead soldiers but to praise them.”

The tournament is a way to celebrate the lives of the soldiers, Saunders said.

Following a 21-gun salute from the honor guard of the American Legion Post 640 in Chesapeake, Ohio University Southern history professor Bob Leith talked about Burlington native William Pigman. Pigman, who died in service during the Civil War, was one of several names added to the Burlington Veterans Memorial.

Other names that were added to the monument are David Snyder who died in the Korean War; Joseph Perry and Walter Noble, both killed in WWII, and Benjamin Terry and Ramson Riddle, killed during the Civil War.

The annual event started as a way a to honor the memory of Burlington native Theodore “Tuc” Church, who was killed in Iraq on Memorial Day in 2007.

“It grew from there,” Saunders said.

Proceeds from the tournament paid for the community’s veteran’s memorial when it was built in 2009. Since then the proceeds have been used to better the park.

Church’s family is among those who came to the tournament.

“We appreciate the work that Chris has done to keep it all together,” Darrell Church, the man’s older brother, said.