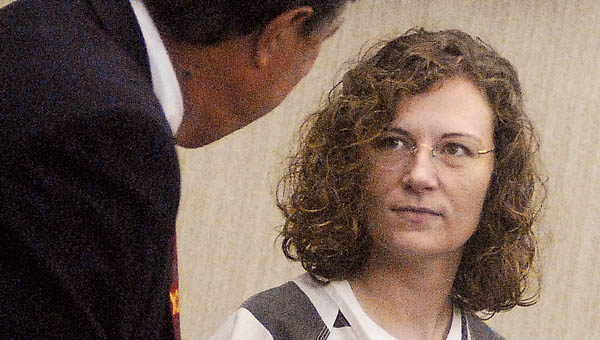 Megan Goff talks with her attorney William Bluth before the start of a pretrial hearing in Lawrence County Common Pleas Court Friday.

The judge who is scheduled to hear the case against accused murderer Megan Goff next month heard arguments Friday on a motion filed by her attorneys, asking him to dismiss the indictment against her.

Judge Patrick McGrath has yet to rule on the motion.

Goff is to stand trial Aug. 1 for the murder of her husband, Bill Goff, in March 2006. Her first trial ended in a conviction but that was overturned late last year by the Ohio Supreme Court.

During the hearing in Lawrence County Common Pleas Court, defense attorneys Paula Brown, William Bluth and Richard Parsons asked McGrath, sitting by assignment, to dismiss the indictment against Goff because the grand jury proceedings were not taped in their entirety and because portions of the tape were inaudible.

“The law is clear in this area,” Brown said. “The grand jury proceedings all need to be recorded, especially when dealing with a serious felony as is the case in this matter.” Brown said she believed the law demanded strict compliance. She cited a similar case where a judge dismissed an indictment against someone two weeks before a trial was to begin because the grand jury proceedings had not been taped.

Brown also said the tape contained 390 instances where a person talking was inaudible. She said she and her colleagues tried to have the tape enhanced but were unsuccessful in alleviating the quality problems.

The motion to dismiss the indictment and a couple of other defense motions had been filed under seal, meaning the judge and prosecutors could see the evidence supporting their motion but the general public could not.

“The grand jury completed its task and now we are ready for retrial. The policy of secrecy no longer applies,” McGrath advised.

McGrath said he will issue a written ruling on the motion.

The judge denied a motion from the defense to force Lawrence County Prosecutor J.B. Collier, Jr., to recuse himself from the case.

Brown contended that, if Collier recused himself from the last trial, he should also do so this time.

Collier countered he had not officially recused himself from the last case. He pointed out that during the last trial, he may have been called as a prosecution witness because he had sat in on a conversation between Goff and an expert witness for the prosecution, Dr. Philip Resnick, and that is one of the reasons why he did not try the case.

Resnick will not testify during this trial, thus making that issue moot.

McGrath also denied a motion to dismiss the case based on prosecutorial misconduct.

Brown said, during the grand jury proceedings, it was clear grand jurors had asked Lawrence County Sheriff’s Office Detective Aaron Bollinger questions about Goff’s mental state when he interviewed her soon after the shooting. Brown said in spite of Goff screaming and crying, Bollinger had told the grand jurors she was “sitting there, the back door of the detective’s car open, casually sitting there,” she said.

But during the common pleas trial he had testified she was upset. Brown said she also didn’t think it was appropriate for Bollinger to have speculated with Goff on a motive for the shooting. Brown said during his interview with Goff after the shooting, Bollinger had mentioned that her estranged husband, Bill Goff, had had a “nice piece of property.”

Brown said Bollinger’s description of the night of the shooting, “to me, were half-truths,” Brown said.

But Bob Anderson countered that, although Goff had been screaming and crying at one point after the shooting, deputies had managed to calm her down when Bollinger interviewed her in his vehicle. He also pointed out Goff’s testimony about her interview with Bollinger and Bollinger’s statements about the interview are very similar.

“The prosecutor did nothing wrong and it is pretty ridiculous to claim it,” Anderson said.

McGrath has yet to rule on other motions as well.

The prosecution wants McGrath to adopt an order handed down by the previous judge who heard the case, Fred Crow.

Crow ruled before the start of the first trial that the defense had to show evidence to support Goff’s claims of self-defense before proceeding with claims of battered woman’s syndrome.

Under Ohio law, a person claiming self-defense must prove three things: they did not initiate the incident that led to the crime, they were in fear of imminent bodily harm or death and they did not violate a duty to retreat (if the individual is able get out of the situation without violence, they have an obligation to do so, unless they are in their own home).

The prosecution wants McGrath to order, as Crow did, that Goff and her defense attorneys must prove she abided by the first and third elements of self defense before mentioning she was allegedly abused.

Goff’s trial begins Aug. 1. She is accused of going to her estranged husband’s Hamilton Township Home and shooting him 15 times. She was arrested at the scene. She told authorities she killed her husband after years of abuse and because he had threatened to kill her and her children.

It might be that I am nearing that age where I have to deal with it more, but 2011 has... read more