Nick Gampp: An artist as unique as his work 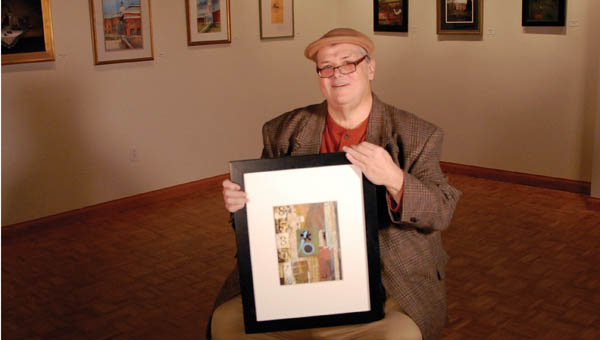 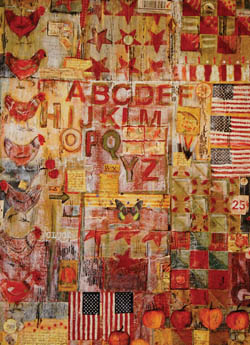 Gampp lives on a farm in Southern Ohio, down a country road inhabited by many members of his family. This love of farm life is reflected in his art.

Gampp, a Portsmouth area resident, is an artist and also teaches art at Ohio University Southern and Shawnee State University.

He dabbles in just about every medium but has a preference for collages and abstract art.

Gampp waited until he was 50 to finish his degree in studio art; his passion for art is something he has had since he was a small child.

His father was a farmer and his mother was a housewife, but Gampp credits his parents for his love and understanding of art.

“My mom would take time to show us how to draw things or do things,” Gampp said. While farming, his father would spend the day outdoors and observe things.

“They both really set me up to have a really observant eye and to really appreciate looking at things and I constantly do that,” Gampp said.

Though Gampp’s parents could only afford to send one of their children, his sister, to college, he never lost his appreciation for art.

Gampp’s father talked to him about his going to college so late in life.

“A lot of my work is very much about action and process,” Gampp said. “I work on big canvases in the yard, throw paint on them, I hose them down. I mist them. I let the colors run together. I set them up, let them down, move them around. I work all the way around the canvas. It is so exciting to me. I love the spontaneity of throwing that paint and having it happen.”

One of his collage pieces, which he titled RG146, has a theme of the county fair, complete with chickens and flags, and seemingly everything but the farm’s kitchen sink.

He included a postmark from an envelope because he loves to get packages in the mail.

Another part of this particular piece is the arrangement of the chickens in the collage. All the chickens, except for one, are lined up exactly the same, with that one chicken not following the directions or copying anyone else.

“That is an example of my belief that I have never exactly done things like everyone else. If they said go right, I would go left. That’s kind of my admonishing to other people. It’s OK to make your own choices, and if it is not the way you want to go, you don’t have to go that way. Your own way could be the best way.”

Gampp said this piece is the one that best sums up his personality.

The artist has won awards for his work and also sells some of it from his studio.

“I’ve done all right with it, in that I have been able to partially support myself, with working part-time too. I wouldn’t want it any other way.”

He said he plans on teaching for as long as he can.

“I have to go somewhere to be with my own kind,” he said. “People who understand the importance of the correct shade of blue.

“I like to think about my art,” he said. “If I finish a painting, I might sit on the living room floor and look at it for four or five days, every hour, looking at how the lighting is on it, how it needs changed, and seeing if it is saying what I want it to say. My work is mostly abstract and so we’re not looking at concrete shapes, but ideas. I want to be sure, that from the color and brush stroke, they can fully fall into what I am wanting them to see in that.”

Gampp said he never hung any of his own work at home until a few years ago, when his wife hung it while he was out of the house that day. It took him awhile to adjust to it.

“It is very personal for me and private,” he said. “I think it reveals a great deal about me.”

Gampp collects everything he can, and is crazy about a good bargain. He loves to be on the go and adores reading and cooking. He is a big fan of fun, conversation and laughing.

“I love to go any place I can see anything new and different, so we are constantly on the road,” Gampp said.

“I think, maybe, my whole life is just a quest for information.”

The clients at Kate and Tony Barker’s shop never complain about their haircuts. And while they never even bother to... read more