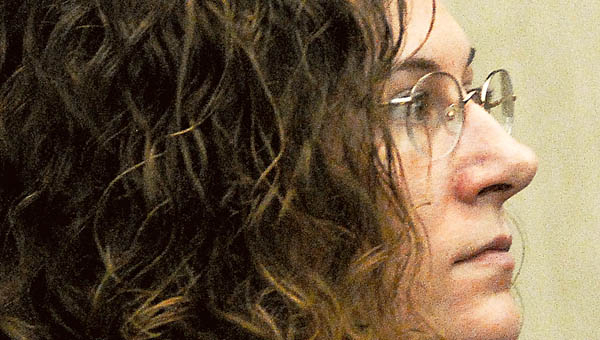 People sitting in the front row of seats in the gallery of the courtroom let out a quiet cheer when visiting Judge Patrick McGrath read the first of Megan Goff’s verdicts: not guilty of the most serious charge, aggravated murder. But the mood deflated quickly when McGrath read the next part: guilty of murder.

Goff herself covered her mouth with her hand and shook her head slightly. She seemed to steady herself at the defense table with her other hand, her head down, her hair falling to cover part of her face.

It had been a trial that lasted two weeks from start to finish. Most trials in Lawrence County don’t last that long.

In fact, Lawrence County doesn’t have many trials at all and defendants in several other high profile murder cases have pleaded guilty and avoided a trial.

But those involved say the Goff case was unusual in so many ways.

Now guilty of murder, Goff faces a life sentence with the possibility of parole after 18 years — if she had not used a gun to commit the crime she would be eligible after 15 years.

But state law mandates an automatic three-year sentence for what is known as a gun specification and it must be served consecutively to anything else, hence, the 18 years.

While she might have wished for complete acquittal, the move from aggravated murder to murder has an obvious benefit. In her first trial she was sentenced to life with parole after 33 years, again, 30 for the aggravated murder charge and three for the gun. She will be sentenced in two weeks, on Aug. 26.

What the judge told the jury

After the witnesses testified and lawyers for both sides gave their closing arguments, visiting Judge Patrick McGrath explained to the jury how they should view the case and what laws they had to follow in making a determination of guilt or innocence.

Those jury instructions explain such areas of criminal law as where the burden of proof lies (with the prosecution) and what, exactly, is reasonable doubt.

“Reasonable doubt is a doubt based on reason and common sense. Reasonable doubt is not mere possible doubt, because everything related to human affairs or depending on moral evidence is open to some possible or imaginary doubt. Proof beyond reasonable doubt is proof of such character that an ordinary person would be willing to rely and act upon it in the most important of their own affairs,” the instructions stated.

McGrath’s instructions also included specific information about the three conviction choices the Goff jury had before them: aggravated murder, murder and voluntary manslaughter.

Aggravated murder required prior calculation or design and Assistant Lawrence County Prosecutor Brigham Anderson argued Megan Goff did intend to kill Bill Goff and that she had planned the attack and took two guns to shoot an unarmed man.

“She went there armed and ready to kill him,” Anderson said. In an aggravated murder charge it is the planning that is important.

At one point Thursday evening the jury sent a written question to the judge asking about aggravated murder versus murder.

While a murder conviction did not require proof of the planning, it still required proof of intent — that Megan Goff intended to kill her estranged husband when she shot him March 18, 2006.

The lesser of the three charges, voluntary manslaughter, acknowledged that Megan shot Bill Goff but perhaps in a “sudden passion, or in a sudden fit of rage, either of them brought on by serious provocation.”

If the jury had chosen to do so, it could have said Megan Goff was an abused woman and shot her estranged husband in self defense and in the defense of her children, which is what her attorneys argued was the main fact of the case.

“This case is about a battered woman meeting with her husband in order to save her children,” defense co-counsel William Bluth said.

Ohio law requires people who claim self-defense to prove they did not create the situation that led to the crime, they had reasonable grounds to believe they were in imminent danger of death or great bodily harm, and that they did not violate a duty to retreat — If they could get out of the situation without using force, state law requires them to do so unless they are in their own home.

A most unusual case

This second trial of Megan Goff was uncharted territory for the prosecutor’s office. Lawrence County has not had a retrial since J.B. Collier Jr., took office.

“We haven’t even had one get to the Supreme Court,” Assistant Lawrence County Prosecutor Bob Anderson said.

Bob Anderson was prosecutor for the first Goff trial. He pointed out that the state’s highest court doesn’t take cases unless there is some overriding statewide concern or it raises a constitutional question.

He suspects the battered woman defense and questions surrounding it may have ignited their interest.

Through her attorneys at that time, Marty Stillpass and Chris Delawder, Goff waived her right to a jury trial and had her case heard by visiting Judge Fred Crow, who was then presiding over the case.

In the second trial, jury selection took three days because prospective jurors were asked about their knowledge of the case and if that, and any pretrial publicity, had colored their opinion.

They were asked individually about this before they were asked anything else about the case. In most trials, jury selection in Lawrence County only takes part of a day.

An eight-man, four- woman jury was seated Wednesday, Aug. 3. In the end, two jurors initially selected were dismissed. The first one because he kept nodding off and another for medical reasons, changing the jury to eight men and four women.

The defense had sought a change of venue because of pretrial publicity. That was one of more than a dozen motions they filed.

The first trial racked up a transcript of more than 3,000 pages. Bob Anderson said other murder cases wind up with transcripts a third that size.

Also, battered woman syndrome was the crux of the defense. Megan Goff claimed she shot Bill Goff in self defense and the defense of her children. Bob Anderson said this idea has only been around some 20 years under Ohio law.

Each time defense attorney Paula Brown walked to the podium to question a witness, the brunette had to squeeze between the prosecution table and the podium.

Why didn’t she just walk behind the chairs? From first appearance there seemed to be plenty of room. But looks can be deceiving. There in the floor behind both the defense and prosecution tables, along the gallery rail, out of sight but well within reach, were boxes and boxes of documents, collected over the five years this case has been in existence.

Each side was asked how many hours they had put in on this case.

Bob Anderson didn’t have an answer, either. But he did have an anecdote.

When Brigham Anderson went on vacation in late July he took the 3,000-plus page transcript with him to Myrtle Beach.

Anderson said he worked an entire week, eight hours a day, on just the 45-page brief when the Goff case went before the Ohio Fourth District Court of Appeals.

He is complimentary about both sets of defense attorneys.

“She has been vigorously defended by two sets of very capable attorneys,” he said. “She was well represented then and now.”

One thing that isn’t huge about the case is the cost to the taxpayers. Bob Anderson pointed out that prosecutors are salaried county employees. Regardless of their hours worked they don’t see any more money for what they do. And Goff has not relied on court appointed attorneys. She hired her own defense counsel for both trials.

Patrick McGrath was born in Michigan and now lives in the Columbus area. But there is a little Lawrence County in his background.

His grandfather, John Berringer Sr., lived here for three years during the early 1900s and worked in the iron industry. Berringer was a metallurgist at a time when this profession was almost unheard of.

His uncle, John Jr., was born here. By the time his mother, Eunice, arrived in 1906 the family was living in Zanesville. His grandfather eventually went on to live in Flint, Mich., where his grandfather started a foundry to service General Motors.

Asked for his opinions of the case, Brigham Anderson said he was satisfied and thanked the jury for what he said he knew was a difficult task.

“You present a case and the jury makes a decision and we honor that decision,” he said.

“We’re pleased with it,” Bob Anderson said. “The verdict did justice.”

But defense co-counsel Paula Brown said she was disappointed and the verdict would be appealed.

“It’s a little emotional for us right now,” she said. “We have worked with the family for four years. You get close to the client and close to the family.”