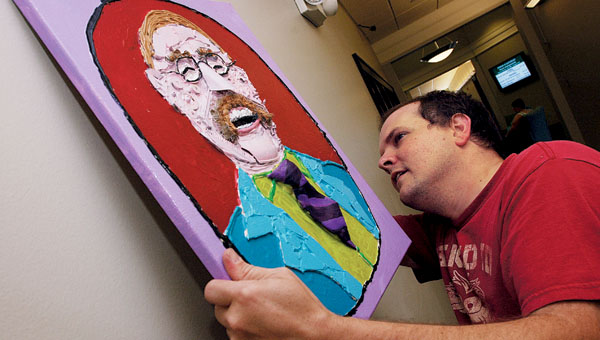 PROCTORVILLE — Most people, when they see a bowl of rice, a few strips of aluminum foil and some kitty litter, unused, of course, that’s all they see.

But when Robbie Poore looks at that detritus of every day life, he sees a work of art. Or at least the fixings for one.

And for the past six years, that’s what he has done, taken lost objects and turned them into found art. Now Poore is offering those three-dimensional works on canvas for the latest show at the Ohio University Southern-Proctorville Center.

“The first piece was done because I needed something for my bedroom,” Poore said. “I had an empty space above my TV. I had a canvas but no paint. I had some glue.”

That’s when the rice, foil and litter started beckoning and he found drawn to a creative muse he never knew before.

“I had no idea what would happen,” he said. “It is just an abstract piece. And it’s the one I will never get rid of.” 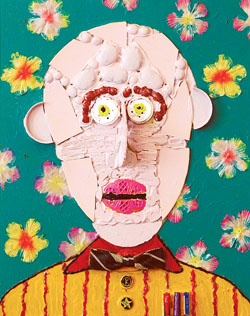 Next he created an art sculpture for his fiancée for her apartment.

“Then I started making random ones and started taking them to work,” Poore said.

Now Poore spends his off hours from his job at Michaels, the craft store, in the studio he set up in his basement where he has meticulously catalogued his art stuff.

“My junk is organized,” he said. “I bring it home and separate it into buckets and what it is is written on it.”

That junk can range from beaded curtains to roofing nails to lids of soup cans.

“There’s Christmas lights,” he said. “I like to use those. I usually paint over them. I like the shape of the bulb.”

Then there are the customers who clean out closets at home and bring in their finds. One customer read about Poore’s sculptures and brought bags of clip-on bow ties that belonged to her late husband.

“This is for the boy who works at Michaels who uses junk,” the woman said.

This is the third solo show for Poore, who candidly shuns what he sees as the trappings of the art world.

“Art people bother me,” he said. “I still don’t know what I am doing.”

Yet every evening after work Poore is in his basement studio where he turns on the Pink Floyd’s “Wish You Were Here” album. Then he starts to turn kneepads into turtles or a frame and mirror into a rocket ship, using only his imagination to guide him, never knowing what will turn up.

“Last night I was going to put a hanger on a piece for this show and it fell apart,” he said. “I laid it down on something else and it looked like a cat’s head. I don’t want to put too much thought into it. I want it to be fun.”

And as far as trying to come up with the message behinds his abstracts, he declines.

“I think there are enough people out there doing that,” Poore said.