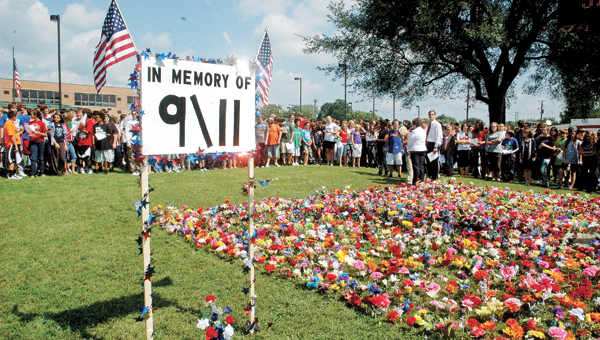 Colorful paper flowers blew in the wind in remembrance in front of a local middle school.

Fairland Middle School had a memorial assembly Tuesday afternoon for 9/11 victims on the front lawn of the school.

“The teacher asked us if we wanted to and we loved the idea,” Chase Malone, sixth grader, said.

Malone and fellow sixth graders Emily Chapman, Chase Fisher, Hunter Tolliver, Evan Cooper teamed up to plan the project. The assembly was originally planned for Friday but they did not have enough supplies. They only had 1,500 artifical flowers and needed 3,000.

The students worked all morning attaching the flowers, including roses, daisies and sunflowers to a wooden laundry clip and writing a victim’s name on the clip.

“Our hands are still blistered from working,” Chapman said.

Principal Jim Roberts welcomed the student body to assembly and stressed the importance of remembering the attacks and what impact it had on America.

Marcus Clinton, an eighth grader, led the Pledge of Allegiance.

Even though these students didn’t remember the attacks firsthand, they still had a connection.

“It’s good that parents, the community and teachers have instilled compassion in them,” Roberts, said. “They have been taught to live it even though they haven’t experienced it.”

Next step remediation in riverfront development

City to advertise for bids soon The next step in the development of the city’s riverfront property may begin this... read more