Sherman Thompson Towers racks up a first: A birth

IRONTON — On the evening of July 8, Lawrence County EMS supervisor Bill Elliott received a radio call that was so strange he had to ask to hear it again.

“Maternity problem at Sherman Thompson Towers,” the message was repeated. 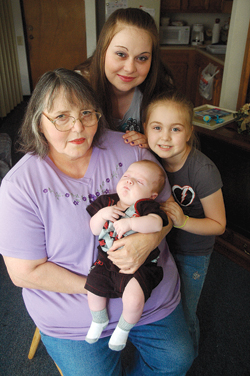 Grandma Debbie West holds her grandson Matthew Thompson, 2 months, inside her apartment at Sherman Thompson Towers with her daughter Tiffany and granddaughter Lexi West. When area dispatchers received a phone call of a women going into labor at the towers they had thought it was a prank call. Baby Matthew was making a grand appearance.

In the 32 year history of the retirement facility’s existence, many emergency calls have been made due to health problems involving elderly residents. But a call to deliver a baby? That was a first.

Tiffany West, nearing the end of her second pregnancy, was spending the day shopping with her mother, Towers resident Debbie West.

“I kept noticing her flinching and asked if she was in labor, but she said ‘no,’” Debbie recalled.

Once they reached Debbie’s eighth-floor apartment, Tiffany decided that a warm bath would ease what she considered to be false labor pains.

Soon after, her water broke in the tub.

“I told her I was calling the hospital,” Debbie said, recalling her panic.

“And I told her to call the squad!” Tiffany laughed, noting that she managed to get out of the tub and crawl into her mother’s bed as she awaited assistance.

A very short time later, Elliott and fellow Lawrence County EMS workers Marvin Bishop and Samantha Wood were crammed into the lone bedroom of apartment 815 with Tiffany, her boyfriend, John Thompson, and Debbie, preparing to help a child enter the world.

Within minutes of the EMS workers’ arrival, 7 lb., 2.5 oz. Jacob Michael Thompson made his grand entrance on the scene.

“It’s kind of funny that he’s the only baby ever born here and his last name is Thompson,” Debbie said, noting that many of the Towers’ residents joke that the child’s first name should be Sherman.

Jacob’s older sister, 6-year-old Alexis “Lexi” West, was whisked away to her grandpa’s house when the chaos of July 8 began to unfold. But she doesn’t care about missing the details. She’s just happy to have a baby brother.

When asked what she thought about the new addition to her family that day, she said, “It made me feel great. My heart is smiling.”

Smiling also is Tiffany West and not just because her baby boy is healthy. She heaped much praise on Elliott, Bishop, and Wood for their rapid response and cool demeanor under pressure.

“They really knew what they were doing,” she said. “They were great.”

Elliott, an 18-year emergency services veteran who recently passed his board exam to become a registered nurse, has delivered four babies in his tenure.

“It’s very rewarding to help someone in need,” he said, adding that his faith in God is his primary motivator to assist others. “It’s something you get addicted to after a while.”

As Lexi twirled and danced while her mother held Jacob in her lap, Debbie summed up this most unusual of births.

“This is my fourth grandbaby and there is something unique about all of them. But this one will never be forgotten.”