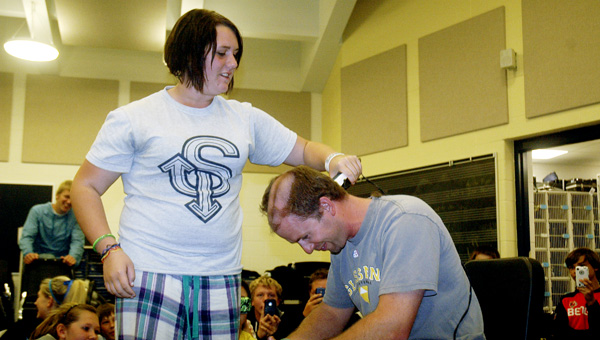 SOUTH POINT — The South Point High School Band had a lot to prove this weekend.

A young band, with a new director, they performed poorly at their first competition. This weekend was an opportunity to redeem themselves and prove to everyone – especially themselves – that they were better than their earlier performance indicated.

Band Director David Edwards said he knew his students needed a little extra motivation to do it.

So Edwards took a leap of faith. He told his students if they placed first at Saturday’s Coal Grove Invitational they could shave his head.

Seeing their director bald proved to be all the motivation the students needed.

On Saturday, the South Point High School Band swept every category at the Coal Grove Invitational. In addition to being named Grand Champion they took home top scores in the overall music, visual, general effect, color guard and percussion categories too.

Edwards said Monday he would not make the same bet again. “It’s not going to happen. I have too much faith in them now,” he said.

Then Edwards put the fate of his hair in the hands of his students allowing senior and junior band members to take turns wielding the electric razor that removed his brown locks.

“I’m glad to see he had to shave his head,” said Freshman Trey Ritchie, who plays trumpet. “He was telling us, ‘We are the second place band.’ It felt really good to hear our name called for everything. I think he honestly didn’t expect it,” he said.

“I would never be so crazy to make such a bold gamble had I not had as much faith in them as I did,” Edwards said. “This is a very, very young group, so I thought they needed a little extra bit of motivation. I honestly did not believe they were as good as they were. I made that comment and they spent two weeks getting ready for that and here it is,” he said

“I want you guys to enjoy the essence of everything that happened Saturday,” Edwards told his students just moments before warning them he had a laundry list of things for them to work on before their next competition. He advised them to stay humble and work even harder. They are the band to beat now, he said.

The band will next compete Oct. 15 at the Buckeye Classic hosted by Ironton High School.

Band members say they are up for the challenge.

“I would like to see the score go up a lot,” said sophomore Andrea Kleinman, who added she hopes the band can eventually compete at Nationals.

It’s a goal that is shared by Edward and even Principal John Maynard. “I’d like to see them continue to improve, go on to state, perform at the highest level and receive a one. Then start preparing for the nationals in the future.”

“That is probably our goal to get them to the highest level we can and have as many seniors go on to the next level – be a member of a band or color guard in college,” he added.

PROCTORVILLE — On Friday morning it will be business as usual for the Honorable Donald R. Capper as he sits... read more