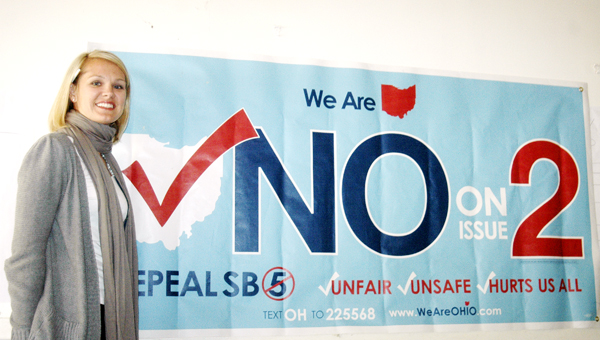 IRONTON — As a young English teacher at Ironton High, Courtney Johnson never intended to become one of the faces of a highly charged political ad campaign. She simply felt she had to get involved for Ohio’s future.

Johnson, a 32-year-old Pedro native and 1997 Rock Hill graduate who teaches 11th graders, is featured in a statewide television ad produced by We Are Ohio, a citizen-driven and community-based organization asking people to vote no on Issue 2, a referendum that would repeal Senate Bill 5.

The legislation sparked controversy since it was adopted earlier this year because it restricts public employee compensation and collective bargaining rights for approximately 360,000 teachers, police officers, firefighters, prison guards and other public servants.

The ad began airing statewide last week and is expected to run frequently through Nov. 8.

Johnson, who has taught for 11 years, has been active with We Are Ohio since February, when she became outraged over the passage of SB 5.

“I was looking for something to do to combat it on a rainy President’s Day and I just went online to see if there was a canvass or a phone bank that I could do because I just felt helpless,” Johnson said.

“I just think it is completely unfair. It is one of the most unfair things I have ever witnessed in my life. The politicians think they can shift the burden of the state budget on to the working people of Ohio and the fact that they did the bill without listening to any input from any working person, really sealed the deal for me,” Johnson said. “They weren’t listening.”

After finding the We Are Ohio organization, Johnson began making phone calls encouraging others to contact their state legislators to oppose the bill and then joined protestors at the Ohio Statehouse in Columbus.

At the time, Johnson was teaching at Fort Hays High School, where she taught for a decade.

Johnson said she believes she was asked to be featured in an ad because of her “dedication to activism” to repealing SB 5 and the fact she has been so outspoken about how the bill will affect teachers.

She believes, if the bill is not repealed, it will adversely affect the quality of education in Ohio and classroom safety.

When teachers come to the negotiating table they often fight for smaller class sizes and enriched curriculum that includes foreign language, arts and physical education, which is being stripped out of schools because of the emphasis on standardized testing, she said.

Johnson said she is confident that SB 5 will be repealed.

“When I talk to folks at their door and on the phone, once they understand that no on Issue 2 repeals this unfair bill, SB 5, they are with us. Folks are with us because they know this bill is unfair and it will affect their community.”