Judge to rule on Edens motions 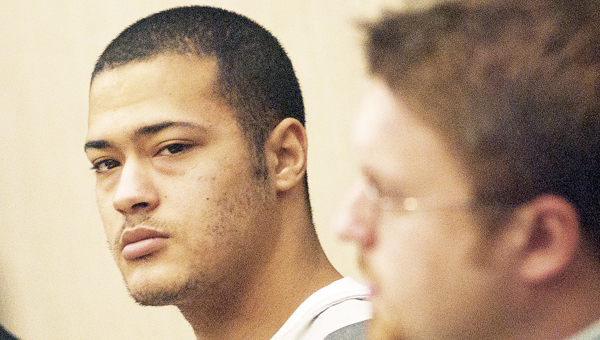 Charles Edens looks toward the prosecuting attorney during his motion hearing Thursday in Lawrence County Common Pleas Court before Judge D. Scott Bowling. Edens will stand trial in January for the murder of Auston Wells this summer.

Lawrence County Common Pleas Judge D. Scott Bowling said he will rule soon on four motions that have been filed by attorneys for Charles Edens, the Huntington, W.Va., man accused in connection with a fatal shooting this summer in Ironton.

Edens, 22, is accused of shooting to death Auston James Wells, 19, of Ironton.

His attorneys had filed four motions in the case prior to the Thursday hearing, none of them unusual in cases such as this. One motion asks the Lawrence County Prosecutor’s Office to turn over any juvenile records it may have on Edens.

A second asks the prosecutor’s office to preserve and catalog all physical evidence in the case. A third asks for transcripts of all grand jury testimony in the case and a fourth requests the names of all the people who testified to the grand jury when it met to consider indictments in the case.

Defense co-counsel J.T. Holt said he had also filed a motion Thursday requesting what is known as “discovery” of additional information in the case. Paul Scarsella, special prosecutor, said much of what Holt and co-counsel Mike Gleichauf have requested can be easily obtained, such statements and recordings of various witnesses.

“The only thing left is photos of the autopsy,” Scarsella said, indicating this had been one element of the case that had required additional time.

Bowling asked Edens about his incarceration. Edens remains in jail under a $250,000 cash or surety bond plus a $200,000 own recognizance bond.

“Do you have ample opportunity to help prepare for the defense of this case?” Bowling asked. “Do you need anything?” Edens indicated he was fine.

In count one, the jury indicted Edens on one count of murder with a gun specification, meaning he used a gun to commit the alleged offense.

The second count is also murder but alleges Edens assaulted Wells who died as a result of the assault. It also carries a gun specification.

The grand jury also indicted Edens on one count each of felonious assault, tampering with evidence and having a weapon under a disability. Ohio law prohibits convicted felons from having a weapon; Edens was previously convicted of a drug charge.

If convicted of the murder charge and the gun specification, Edens faces a life sentence with possibility of parole after 18 years.

Wells was killed Aug. 30 during an incident near the corner of Eighth and Madison streets.

PROCTORVILLE — A Proctorville man was scheduled to be arraigned today in Lawrence County Municipal Court following an incident... read more