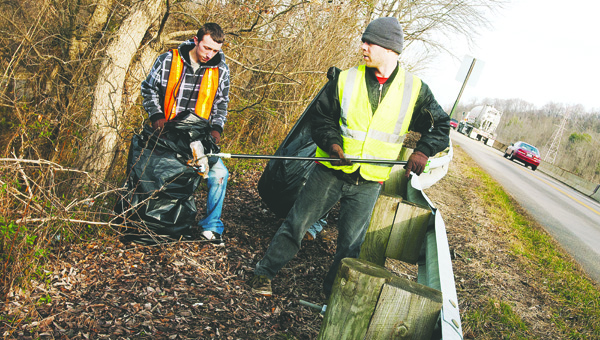 Cody Swords, left, and Gerald Grosshans pick up trash along County Road 1A in Scioto County as part of a War on Litter event endorsed by municipal court judges from both Lawrence and Scioto Counties.

HAMILTON TOWNSHIP — County Road 1A is a seven-mile stretch of pavement between western Lawrence County and eastern Scioto County and travelers will tell you parts of it are peaceful patches with well-kept homes and open fields mixed with busy industries. But along that roadway are pockets of litter that, to many, are as shocking as the other areas are beautiful.

Wednesday, the Lawrence-Scioto Solid Waste Management District, in conjunction with the municipal court judges in both counties, took public aim at the litter bugs with a War On Litter. Community service crews, operated through municipal courts, began at 9 a.m. collecting the litter from alongside the highway. The result was 87 bags of trash and eight tires gleaned by 2 p.m. along roughly half the length of the highway.

“And we’re going back tomorrow,” Dan Palmer, solid waste director, said. “There was an atrocious amount of litter. But we’re making a dent in it.”

Palmer said he is pleased with the cooperation he has received from county judges and other officials who understand that a cleaner county is a more attractive, more marketable county.

“This is a highly traveled area. We have STAR Community Justice Center there, Pepsi (cola bottling company), Duke, Dow and Rumpke,” Palmer noted.

Palmer said he hopes to soon have five crews out each day, between the two counties, cleaning up other litter-strewn roadways.

Commission goes to court over airpark

CHESAPEAKE — The fate of property adjacent to the Lawrence County Airpark may be decided in court. Recently... read more