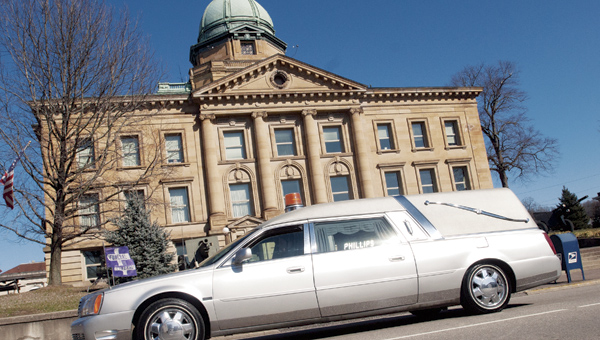 A hearse carrying the body of two-term County Commissioner Paul Herrell moved slowly Monday afternoon past the courthouse Herrell loved so much before taking his body to its final resting place at Aid Cemetery.

Herrell, 67, died early Friday morning at King’s Daughters Medical Center. The Waterloo native was in the second year of his second term, having served earlier as commissioner from 1999 to 2002. 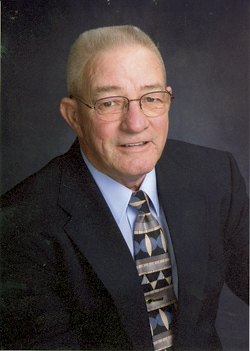 At the north corner of the courthouse was an ambulance from the newly formed Lawrence County EMS with its lights flashing as a silent sentinel to the commissioner as the hearse drove by. Herrell had been a strong supporter of the EMS. As the funeral procession went past the sheriff’s office on the next block, deputies standing on the sidewalk saluted.

The burial followed a half-hour service at Ohio University Southern’s Bowman Auditorium that was filled with family, friends and colleagues.

Herrell’s family received mourners before the service as those in attendance watched a photographic montage of scenes of Herrell’s life — the commissioner with his wife in Halloween costumes, holding a great grandbaby, with a granddaughter at graduation, on vacation with Linda, his wife of 50 years, or tending his beloved farm.

“I understand you will have a broken heart, but I don’t have a sad message to tell you,” Pastor Darrell Fowler told the audience. “If Paul were here, he wouldn’t tell you it was a sad story. For there is hope for those who know Jesus Christ.

“Today is not the end. … Hope will be in Jesus Christ. We have to be the hope for those without hope.”

At one point Fowler talked about the massive heart attack Herrell had suffered during his first term when the commissioner was hospitalized for weeks at a Columbus medical center.

“How amazing it was that God allowed him to live,” Fowler said. “He was literally clutched from Hell. God reached down and saved him. … I’ve got a hope that we will see each other. It’s a day Jesus Christ has extended his mercy.”

Ironton Marine honored for service Most people would be honored to receive any recognition for their work and dedication, let... read more