Most people would be honored to receive any recognition for their work and dedication, let alone 11 accommodations. But for Ironton Marine Dustin Lawless those awards pale in comparison to his greatest achievement.

“The most rewarding award I received was to bring all the men I led into combat, 29 Marines and two Navy corpsman, home alive to their families,” said Lawless, a sergeant with the 3rd battalion 8th Marine regiment weapons company based in Camp Lejeune, N.C. 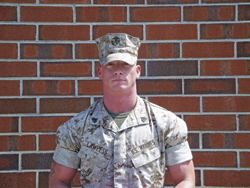 Sergeant Paul Dustin Lawless, with the 3rd battalion 8th Marine regiment weapons company based in Camp Lejeune, N.C., was recently honored for his service in Afghanistan. Lawless is a 2004 Ironton High graduate.

For his actions in Afghanistan in 2011, Lawless was awarded the Navy and Marine Corps Commendation Medal, which is the fifth highest possible award for a Marine.

“He truly did lead by example and exhibit the traits needed to be successful,” said Josh Lewis, a retired Marine deployed with Lawless in 2010. “His physical fitness and decision-making process is second to none.”

Lawless, 25, was born in Huntington W. Va., but moved to Ironton in the fourth grade. He graduated from Ironton High School in 2004 and he attended Ohio University Southern for a year before joining the Marines in 2006.

“I was at a point to where my life could have gone to the negative,” Lawless said. “I wanted to make my life and my future family’s life better.”

Lawless is engaged with a 2-year-old son. The family lives just off the base with him in N.C.

The soldier was the honor graduate of boot camp and was promoted to private first class. He was also promoted to corporal in March 2008 and then to sergeant in May 2009.

“Sgt. Lawless is a rare breed,” Lewis said. “It’s almost as if he was a born leader and born to serve. It appears as if his work comes so natural to him. He was always calm and collected in the face of danger.”

Lawless was deployed to Iraq for about eight months in 2008. He was a part of the 26th Marine Expeditionary Unit, which is a marine air-ground task force. The unit traveled aboard the USS Kearsarge, making stops in Africa, Amman, Jordan and Kuwait. While in Kuwait, the unit received presidential orders to conduct combat operations in Afghanistan, which took place from August 2010 to May 2011.

“My contract expires in 2014,” Lawless said. “I re-enlisted in 2009 for five more years. One of the reasons I re-enlisted was because I wanted to go to Afghanistan because it was picking up.”

Lawless wants to leave a legacy for future generations.

“It was surreal to know I was going to be a part of history,” Lawless said. “There is a sense of pride to help a cause greater than yourself.”

Lawless never worried about the danger.

“It’s a lot more worry for the families,” Lawless said. “When you are there, you know if you are safe. Your family doesn’t know that you are safe.”

“(Afghanistan) was a lot harder than my Iraq deployment in 2008,” Lawless said. “There wasn’t a single day of being in Afghanistan that you didn’t hear an explosion. Everyday we were taking enemy contact, either by direct or indirect fire, or improvised explosive devices.”

The living conditions were another element the soldiers had to overcome.

“We secured terrain that had never been occupied by coalition forces before,” Lawless said. “We had to dig holes to sleep in. …”

Steve Shelton is organizing a concert with The Boxcars for March 30 at Ironton High School.   Ironton bluegrass guitarist... read more