If that is true, then Brenda Self is about to get busy living.

Although the Coal Grove bonds and income tax clerk of 25 years doesn’t officially retire until the end of the month, the police department and other admirers surprised Self with a going-away party after her last mayor’s court.

“She’s very dependable,” said Mayor Larry McDaniel. “She will be hard to replace.” 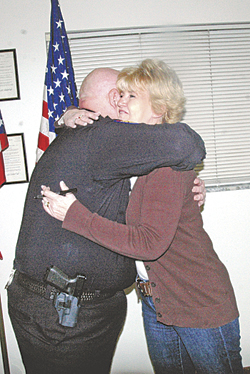 Coal Grove Police Chief Eric Spurlock hugs Brenda Self at her retirement party. The village bonds and income tax clerk is retiring after 25 years of service to the village.

With retirement ahead of her, Self said she hoped she could visit her grandchildren in Indiana more often. Her husband, Bob Self, also a village councilman, will retire from his job at the end of the year.

With endless possibilities on the horizon, Self said her retirement felt bittersweet.

McDaniel said he has interviewed several applicants, but hasn’t made a decision on who will fill Self’s position.

Self was responsible for processing tickets for the police department and handling the money from mayor’s court each month, as well as income taxes.

It wasn’t a glamorous job, but one she was dedicated to, said Coal Grove Police Chief Eric Spurlock.

Spurlock said he never could seem to beat her to the village townhouse each morning, with Self arriving most mornings before 6 a.m., although she wasn’t on the clock until 7 a.m.

“She is a real good person,” Spurlock said. “I hate to see her go. She’s going to be missed.”

With all the tickets the police department writes monthly, the job, it didn’t slow her down.

“She takes care of business,” said village clerk Debbie Fields, noting that Self always had a smile on her face, a smile that people could expect when they visited the village townhouse.

A public hearing on the prospect of the county issuing $400,000 in bonds to build a new barn and arena... read more