A Life of Achievement 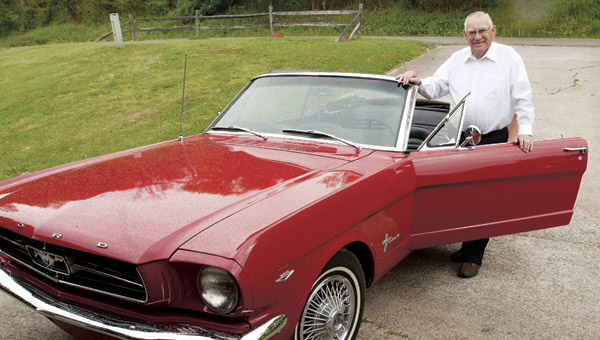 Franklin Furnace resident Clell Elliott with his 1965 Ford Mustang outside his home. This May, Elliott will receive his degree from the University of Rio Grande before his 90th birthday. Elliott will earn his degree in business management.

FRANKLIN FURNACE — Over the years, 89-year-old Clell Elliott has done a lot of things: He’s pastored churches, worked for Uncle Sam, farmed and raised a family.

But on May 5, just two months before his 90th birthday, Elliott will do something he has dreamed of all of his life: He will walk across the stage at University of Rio Grande and collect a college diploma.

It was a long–time coming and Elliott is savoring the success.

Life has been a learning experience. For Elliott, all those experiences will now produce a sheepskin.

Elliott was born in Kentucky. His family moved away for awhile to Illinois but returned to Carter County when he was eight years old. Elliott’s education came from a single teacher at the one-roomed Pope Hollow School.

“We studied history, geography, math, spelling and reading,” Elliott recalled. The education he got, Elliott said, was solid.

“One time a month we had debates. We had spelling bees,” Elliott said. As one class studied, they could hear the teacher working with another class. By the time the younger student got to the next grade, they had advance knowledge of the subject matter. And learning came easy to Elliott.

When he started high school, it was at Hitchins High School in Hitchins, Ky. But his high school years were short-lived: his father insisted he quit school and stay home with him to work the farm.

In his sophomore year, Elliott did just that, walking seven miles in the middle of the day to get home once he made up his mind to help his dad. But he never stopped learning, even if those bus trips to Hitchins High School had come to an end.

And Elliott never meant that this would be an end to his education. He planned to get that high school diploma some day, some way.

When he was 19, Elliott left the farm for a tour of duty in the U.S Navy. He began at Great Lakes, Ill., and spent a little more than 3 years in service. He began as a cook and later trained to run the Naval Post Office. When the opportunities came, Elliott took advantage of as many as he could. He took a typing class to help him better do his postal job. He went to school nights and worked days. When courses were offered Elliott signed up. He loved learning. He got his General Equivalency Diploma. And he got some experiences a country boy from Hitchins, Ky., had never had. His naval years took him to New York City, California, Okinawa and Hawaii. He remembers some California experiences in particular.

After his tour of duty in the navy, Elliott went back to work at General Refractories in Carter County. He spent 13 years there and then got in the Boilermakers union. He retired from the boilermakers in 1984.

And he answered the call to preach.

Along the way, he often combined work experience with formal education. He took classes for three years at the University of Rio Grande.

“I’ve always loved school, loved books,” Elliott said. “I always liked the challenge. All my life I’ve been in some kind of training.”

Four or so months ago, the Rev. Tim Throckmorton, former pastor of Plymouth Heights Church of the Nazarene, where Elliott is a member, suggested that Elliott parlay his wealth of life experiences and his formal education into a degree through the newly established Adult Degree Completion Program at the University of Rio Grande.

At first Rio Grande officials wanted Elliott to take a three-and-a-half hour course before getting his diploma. But once they more closely scrutinized his varied work experience and after reading a letter Elliott wrote to them, “They told me I didn’t need to come to school,” Elliott said with a smile. His degree will be a bachelor’s in business management.

Mark Abell, dean of enrollment management and registrar, said Elliott is clearly in a class by himself in more ways than one.

“I’m going to go out on a limb. I’ve been here 40-plus years and he is the oldest I can remember,” Abell said.

The program is designed for people who have some formal education and a wealth of job experience and want to use both to get a diploma.

He conceded Elliott is, “very, very unusual,” Abell said. “Generally we don’t get people with the life experiences Mr. Elliott has had.”

As for the Rev. Elliott, the coming weeks will be a time for cap and gown fittings and college functions.

“I go May 4 for a (graduation commencement) rehearsal,” he said. And then the next day, he gets to throw his mortar board in the air with the other graduates who have yet to set out on the road of life that Elliott, in his nearly 90 years, has already traveled many years ago.

Elliott’s advice to young people today? Time spent in school is valuable. Education is valuable. Learning is something you do for life.

Now that the Ironton City Council has agreed not to fund police dispatch June and the mayor has handed... read more