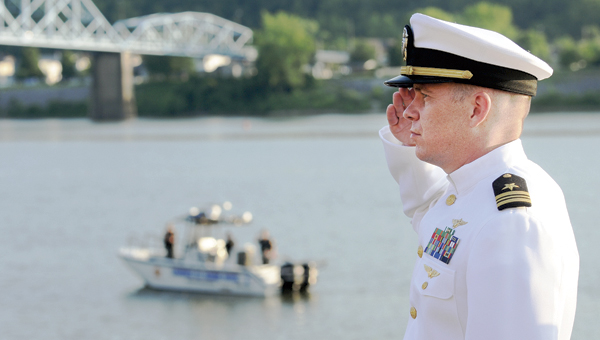 “God Bless the naval heroes who have made it possible to live in peace.”

Those were the words of Lt. Col. (Ret.) Scott Evans, former commander of the Ohio National Guard 216th Engineer Batallion, who was the guest speaker for the annual Navy Night service at Ironton’s Center Street Boat Landing Thursday evening.

The Navy Night service is the official kickoff to Lawrence County’s Memorial Day observance. Navy Night began with the presentation of a flag that flew over Fort McHenry; it was presented by Boy Scout Troop 106. Fort McHenry was the inspiration for Francis Scott Key to write the “Star Spangled Banner.”

Evans began by telling the assembly Navy Night was a somber and serious occasion because it is at this time we remember the price of freedom.

In a nod to the gift of the flag, Evans said there is a sense of relief to wake up and find no matter what may have happened the night before, the American flag is still flying.

Evans pointed out the United States has the largest navy in the world.

“We don’t sometimes stop and appreciate what a navy we have,” Evans said.

Evans said the mission of the navy is to maintain freedom of the seas. The navy has been called on successfully over the years for missions around the world.

“It was no accident President Obama called in the Navy Seals” when he wanted to find and execute Osama bin Laden, Evans said.

The Naval Reserve of Huntington, W.Va., attended the service. The Rev. Leon Dalton gave the invocation and benediction. The Ohio University Southern Alumni Band provided patriotic selections, including “The Navy Hymn.” The Amvets 5293 provided the color guard. At the conclusion of the service, the Boy Scout Troop 106 cast flower petals into the river as the Lawrence County Marine Patrol dropped a memorial wreath into the water. A Marathon Petroleum towboat sounded its horn and shot streams of water into the air.

Attention now turns to Woodland Cemetery, the site of Sunday’s 2 p.m. Veterans Memorial service. Like Navy Night, the public is encouraged to attend.

How many times have you heard the cliché, “If you talk the talk, you must walk the walk”. Within today’s... read more