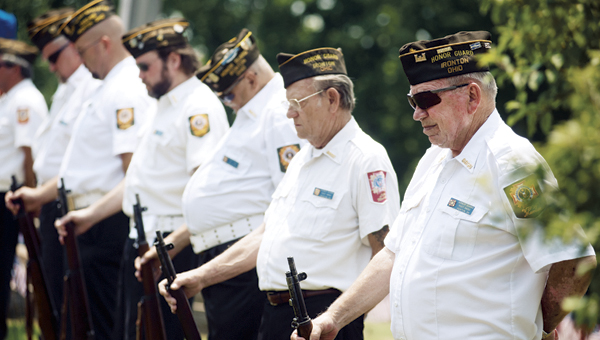 Members of V.F.W. Post 8850 Honor Guard participate in the service.

As flags on the graves of Lawrence County’s veterans fluttered in the slight breeze that blew over Woodland Cemetery, the tradition was honored once more.

It has been a tradition that year after year brings a community of veterans and those who wish to honor them together.

It is the Veterans Memorial Service at the Woodland Ceremony and scores lined the roadway around the veterans plot to participate.

“For 144 years the citizens of Lawrence County have gathered to pay homage to those in the community who have served this great nation,” said Mark McCown, master of ceremony for the Sunday afternoon event. “Today is a day of remembrance … to honor those warriors.”

The ceremony began with the invocation by Brother Chad Pennington followed by the posting of the colors by Ironton VFW Post 8850 and concluded with the Pledge of Allegiance.

As the National Anthem was sung by Herb Rose, many mouthed the words of that musical symbol of America’s freedom.

Then Chuck Keller, VFW State Commander and Vietnam veteran, was the first of three speakers at the ceremony.

“You decided to take this day to be here today,” Keller said to those in attendance. “You joined me to celebrate the lives of those who made the ultimate sacrifice. Nowhere in history has there been a country that has given so much. The lives of all the fallen warriors were not lost in vain. Each life contributed to the evolution of America as we know today.”

State Rep. Terry Johnson, also a retired Army colonel, paid a special tribute to those who made the ultimate sacrifice in World War II.

“This is the most hallowed American holiday,” Johnson said. “A day set aside with great reverence to honor those who fell in the defense of our nation.”

Johnson gave a brief history of Memorial Day, originally called Decoration Day and set aside to honor Civil War veterans. Then, in 1967, the holiday was officially named Memorial Day.

“The name has changed but the spirit of the holiday remains the same,” he said.

Today, those who served either at home or abroad during WWII are called “The Greatest Generation.” But 400,000 of those men and women did not return home after the war. And those who did dedicated their lives to keeping America a country of liberty, Johnson said.

“They saw the horrors of war and they knew they didn’t want that evil to come to America,” Johnson said.

The final speaker was Commander Brigham McCown, son of the late Common Pleas Judge Frank McCown and a 24-year veteran of the Navy, active and reserve.

“Memorial Days provides us a way to recall the sacrifices and selfless service of the veterans,” McCown said. “Today we show our appreciation to the veterans. Memorial Day is reserved to honor those who answered the country’s call but were not chosen to come home.”

Reds use HRs to rock Rockies

Cincinnati's Chris Heisey hit his first home run of the season — a three-run shot in the first inning —... read more