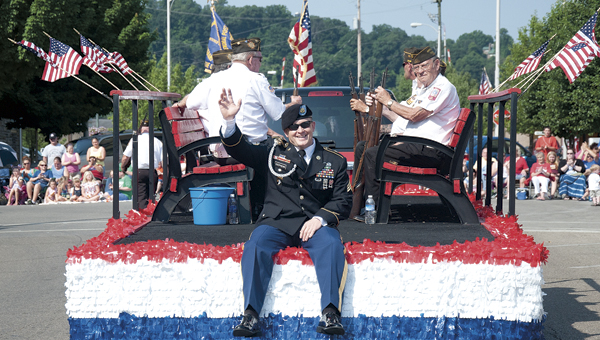 Theresa Pennington-Reilly and her husband, Jay, of Ormond By The Sea, Fla., pulled a park bench from the front of the Ironton City Center Monday and pushed it near the curb at South Third Street.

In a moment, long-time friend, Diana Porter, of Seattle, Washington, arrived to share a hug, the park bench and a lifetime of memories.

“I’ve been coming to the parade since I was 2,” Pennington-Reilly said. “I come every chance I get.”

It was the same explanation from Porter who, like Pennington-Reilly, is an Ironton native. The woman said she tries to make it home twice a year. And Memorial Day weekend is, no question, one of the most popular weekends to come home.

As the 144th edition of the Ironton-Lawrence County Memorial Day Parade marched by, the women, like so many people who lined the parade route, enjoyed the present and at times remembered the past editions of a parade that transcends time and generations.

The Rev. Leon Dalton, who attends the City Mission Church and is a veteran, painted a lawn tractor in vivid patriotic colors. He pulled several small wagons that were decorated in honor of the Army, Navy, Air Force, Marines, the Coast Guard and those service men who are listed as missing in action.

One wagon had a roster of soldiers who had died; another bore the names of those who are serving now. Another had a cross and information about the City Mission.

As he made his way along the procession route, Dalton moved his succession of wagons in a serpentine fashion.

Tri-State Baptist Temple’s float had a huge box that bore the photographs of service men and women past and present who have some tie to that church.

“There’s a lot of history in this,” the Rev. Tim Jenkins, pastor of Tri-State Baptist Temple, said. He pointed to one line of photos and added, “One family has five generations.” That church’s float won the Parade Commander Award.

Abbott Home Care, which won the Past Grand Marshal Award, had chairs with roses and flags, one for each branch of service. A giant screen print collage of a flag, an American bald eagle and other patriotic scenes towered above the chairs. Abbott employee Anna Malone said the float took approximately 30 hours, with six to eight people working to perfect it.

Symmes Creek Restoration Committee and Boy Scout Troop 115 of South Point had a kayak on their float and a cross with a purple robe draped around it. That float won the Civic Award.

“This is the first time we’ve done this,” SCRC Chairman Grayson Thornton said.” I think it took a lot of time and effort. I’m thinking we spent about a month (working on it).”

Best Theme Award went to AmVets 5293, which was dedicated in memory of its first commander, the late David Malone. It was decorated with crosses and flags.

The AmVets 141 float carried soldiers and was followed by members riding motorcycles.

Sunset Nursing Home’s entry included a person dressed as the Statue of Liberty.

Bands and musical groups, be they high school marching bands or college bands or friends who just like to jam, are natural attention getters and there no shortage of them in this year’s parade.

As the Ironton High School Marching Band danced its way through the streets, Pennington-Reilly and Porter grew excited.

“Ralph Falls was my band director,” Pennington-Reilly said with a smile. Describing herself as a woman of a certain age, she played the clarinet. Of the present day parade, she was impressed.

“They are awesome,” she said.

And the talent wasn’t just musical: Members of area dance, cheer and tumbling studios displayed their skills — and frequently the trophies that crown their successes — as well.

Students of the Malone Karate Studio, one of Ironton’s new businesses, demonstrated their skills dressed in traditional karate gis.

The River Cities H.O.G. Club, an organization for Harley owners, made its first appearance in several years. Their float bore three small tombstones resembling those in Arlington National Cemetery and an American bald eagle that bore the actual dog tags of a couple of Vietnam veterans.

“We just wanted to show our club and our support for the parade,” club member Carl Duncan said.

The Southern Ohio Youth Handicapped White Tail Deer Hunt had perhaps one of the most elaborate floats, with a pup tent, a four-wheeler and seemingly real pine trees.

Tea Party Treats, another new Ironton business, opted for a bit of finery with a float of elegantly dressed ladies having a tea party.

As the Shiner’s division made its way down the street, Pennington-Reilly and Porter quickly got to their feet.

After the parade Porter said the veterans were her favorite. Ironton resident Mary Keith couldn’t pinpoint any one thing she liked.

Twelve students from Ohio University Southern’s Electronic Media Studies and two of their instructors spent their Memorial Day behind a camera or operating other equipment that will ensure the 2012 edition of the parade is recorded and available on Time Warner Cable’s public access channel 25. For some of the students, this is their final project before they graduate in a few weeks, assistant professor Don Moore explained.

“Hands-on experience is an important part of the curriculum,” Moore said.

Moore said the parade will be broadcast at 7 p.m. Wednesday, Thursday and Friday evenings as well as other times yet to be announced in the near future.

Misty Swinford sat in the stands at Tanks Memorial Stadium with her son, Connor Ramey. In less than an hour,... read more