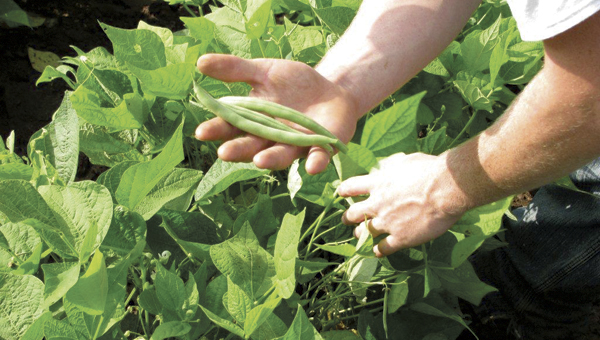 HAMILTON TOWNSHIP — The drought this summer has doubtlessly affected the corn crop in many areas of the Tri-State, but Lawrence-Scioto Solid Waste District Director Dan Palmer said the community service workers sentenced to time at the newly established Lawrence County Life Intervention & Diversion (LID) Work Farm are up to their ears in it, figuratively and literally.

“We just started picking this morning,” Palmer said. “I think they will be busy the better part of the week. We’re fortunate. So many people have lost their crops (due to the drought) or it’s going to be small. But we do own a water wagon and we’ve gotten help from the Hamilton Township Volunteer Fire Department. And the green beans look great, too.”

The farm was created this year as a rehabilitation program for people in Lawrence County convicted of fifth-, fourth- and even some third-degree felonies. State corrections officials have told all of Ohio’s 88 counties they may no longer sentence those offenders to prison and must deal with lower level felons on their own.

Using various grants and donations, Lawrence County has chosen to start a work farm and the county’s two common pleas judges, Charles Cooper and D. Scott Bowling, have been handing out community service work along with probation, fines and orders to make restitution.

“As long as we are forced to look at alternative sentencing by the state legislature, I think it (the farm) serves a very useful purpose,” Cooper said. “It’s better than having them laying around at the county jail. And the numbers in the jail are up no doubt due to House Bill 86.”

Cooper also praised the municipal court community service program, which requires its workers to cut grass and pick up garbage as part of their punishment.

“What I have enjoyed seeing is the effect the program has had on some offenders even before the harvest,” Bowling said. “They are learning to take pride and show up and perform an honest day’s work. They are learning to get to the job on time, take instructions from a supervisor and change bad habits into a good work ethic.”

Bowling said there have been some setbacks with the program but some successes, too. And he is optimistic the farm can have an impact on that segment of the population.

Palmer said, in addition to learning how to grow and harvest the vegetables, the workers have also gotten training in the proper cleaning of the food in accordance with health department standards.

The food grown is being distributed among the county jail, juvenile center, senior centers and area food pantries.

A number of area agencies have partnered to create and operate the work farm, including the courts, the solid waste district and the Lawrence Economic Development Corporation.