Once and future grande dame? 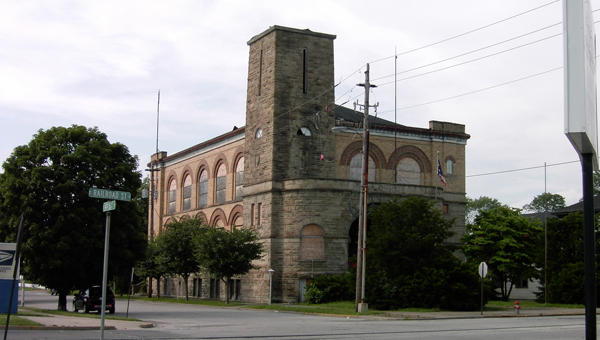 The creaks from the oak steps of the winding staircase sound as sharply in his imagination as they did almost 40 years ago when Terry Null would climb them every other Thursday to the second floor of Memorial Hall to take his seat in the Ironton City Council Chambers.

By then the building once called Ironton’s architectural grande dame by the city fathers was fading, much the same way as any soon-to-be centenarian would. But her once grandeur could still be visualized.

“It was old but the history was there,” said Null who served on city council from 1976 to 1979, the last council to work under a city manager. “The architecture was beautiful, the old style.”

Council would sit behind double-decker mahogany desks on straight back chairs under the unseeing eyes of Ironton founder John Campbell whose lithograph hung high on one of the walls.

“It goes back so much to the past,” Null said. “It would be a blow to the city to lose it.”

On Oct. 19, Memorial Hall will mark her 120th birthday, probably with no fanfare, only the worry that her days as a monument to Ironton’s history could soon come to an end. Still sitting on a corner lot at Fourth and Railroad streets, once the pulse of Ironton, Memorial Hall shows the decrepitude of age and the destructive power of neglect. The roof is now off and rain has twisted many of the second floor planks into ribbons of debris. Windows are boarded up and the front door blocked to any visitors.

But when the monument to the Grand Army of the Republic opened on Oct. 19, 1892, Ironton celebrated for three days.

“October wore her sweetest smile for the dedication,” The Ironton Register reported. “The business streets of Ironton were very lively all those three days. … Memorial Hall was decked in loyal hues. As the strangers came to see what was to be dedicated, they marveled at the stately walls and broke out in admiration at the beautiful structure.”

At 2 p.m. on that Wednesday in 1892, a crowd had gathered around the sandstone structure to hear a welcome by city solicitor R.B. Miller and then an addresses by J.K. Richards, an attorney who set up practice in Ironton in 1857.

“We meet today to dedicate this hall; to dedicate it to the brave men, living and dead, who went forth from Lawrence County, during the dark days of ‘61 to ‘65 to help save the nation,” Richards said. “A grateful town has erected it in their honor to keep alive the memory of their sacrifices and sufferings and tell the story of their patriotic devotion to coming generations. I congratulate you, members of the Grand Army of the Republic, veterans now of time as well as war. In your town, this memorial is raised. … “

The GAR was the reason Memorial Hall was built. That organization of Civil War veterans gave much to Ironton and Ohio, from lobbying for and maintaining a Republican stronghold in state government to the most famous event still in Lawrence County history — the annual Memorial Day Parade.

The post was named for Dick Lambert, Lawrence County’s first casualty of the Civil War, dying in the Battle of Scarey Creek, W.Va., in July 1861, one of the war’s earliest skirmishes. Lambert was one of 14 Union soldiers who died that day as the Union was defeated by Rebel forces. Lambert’s body rests in Woodland Cemetery.

That kind of selfless devotion to country was why Memorial Hall was designed, to salute generations to come.

“Hereafter, when you look on this noble building, when your eyes rest upon the tower emblazoned by the badge of your order or catch the gleam off the sunlight playing upon ‘old glory’ floating at its top, let your hearts be cheered by the thought that your deeds are not forgotten, nay will not perish with you,” Richards said to those veterans that autumn day. “But even in these stones live and work, teaching your children and your children, the lesson of devotion to country and to flag.”

It took 18 months to build Memorial Hall after ground was broken May 26, 1891, on the site of the former farmer’s market, a month after the trustees for the project chose J.W. Yost of Columbus as the architect. Yost came to Columbus from Pennsylvania to create, with Frank Packard, the design firm of Packard and Yost. The duo brought to central Ohio their affection for Romanesque architecture like Orton Hall on the campus of The Ohio State University.

After the speeches had ended and the band’s music faded away, Memorial Hall showed its utilitarian side by serving as a home for the GAR, the Ironton public library and city hall.

The building was made from buff Amherst stone and brick the same beige hue. Second floor windows with Italianate doubled arches show Yost’s love of that style. The most eye-catching feature was the almost 40-foot tower.

“It is made to represent the shaft of a monument,” The Ironton Register reported when the design plans were released. “At its base on the Fourth Street side is a large tablet for an inscription. There are a few windows in the shaft and some patriotic designs half way up, but it preserves its weight appearance throughout and is capped with stone.”

On one first-floor wall was a massive mural of “Sherman’s March to the Sea,” drawn by Elizabeth Nigh Hutsinpillar, who was a friend of the general’s younger brother, John, a U.S. Senator. Around the mural were reading rooms and offices. Upstairs was an auditorium seating 900, a kitchen and cloakroom.

For 13 years Memorial Hall evoked stateliness for the north end of the city. Then, one Monday night in December 1905, fire ripped through the building. Horse-drawn fire carriages rushed to the scene.

“The firemen were compelled to fight the flames at a disadvantage, as it was known that there was a large amount of ammunition and powder in the armory,” The Ironton Register reported. “When the powder exploded, burning fragments were thrown in every direction and the firemen barely escaped injury.”

All that remained was the masonry shell.

Rebuilding the hall to its former glory became financially prohibitive so the city chose a lesser-known architect, T.S. Murray, who simplified many of Yost’s original embellishments.

For the next nine decades Memorial Hall stayed as the heart of Ironton government, housing city offices and a jail, all the while losing her luster as an architectural jewel. In 1995 those offices moved across town, abandoning the building to age and the elements.

Now the county commissioners want to get the hall back working for the city and the county, this time as an emergency operations center — if they can get the price down. Boosting their cause was a recent decision by the Ohio Historic Site Preservation Advisory Board that nominated the structure to the National Register of Historic Place.

As architect for this 21st Century proposed renovation, Shawn Walker, of Ashland-based Walker and Associates, calls putting Memorial Hall on the register a certainty since the national organization rarely, if ever, turns down an advisory board’s nomination.

Walker, who says the community has a two-year window for preservation efforts, first went inside the hall five years ago.

“You can still see some of the grandeur that was built into it,” he said. “But time and neglect had already caused that to diminish. It was before the roof was removed and there was a lot of damage, a lot of leaking. Plaster had fallen. Tin ceilings were starting to rust and noticeably snag.

“Upstairs was scary. The ceilings were collapsed. The wood was rotting, pulled apart. But you could still tell the quality of the original construction. It had held up against the conditions it faced. The deterioration took so long. A lesser building wouldn’t have held up.”

Yet if the county could get the historic tax credits it wants and a manageable loan payment, at least one commissioner believes the restoration could happen. Not to become a symbol of the past, but an avenue to the future.

“I can appreciate the historical aspect of this building but as a commissioner I have to make decisions based on black and white facts,” Commission President Les Bogg said. “And it makes sense to look at restoring this building if the tax credits make it feasible. There is a great need for a new 911/sheriff’s administration office/coroner/EMS/EMA office. There is a great need to have those and the building is close to the courthouse and sheriff.”

“If we can have the same amount of space with $1.2 million because of tax credits,” he said. “Being frugal with the taxpayers money is what commissioners are supposed to do.”

But holding on to the physical remnants of the past is what motivates Memorial Hall supporters like Walker.

“The building is important on state historic level but also important to our city,” the architect said. “There are not a great many buildings of that caliber that still survive in our city. To preserve it is important. But people are right these things have to be done practically. But it could become something productive again and live another hundred years.”