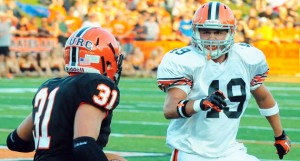 There’s nothing fancy about an Ironton-Russell game. Both teams just like to line up and run right at you.

Both teams were their normal selves last week with season-opening wins behind strong ground games. Fans can expect more of the same this week when the Fighting Tigers visit Russell in a battle of 1-0 teams.

“Russell a lot like us. They’ve ran the same offense for over 30 years. You know what’s coming and they just say, ‘Stop us.’ It’s all about execution,” said Ironton coach Mark Vass.

“Coach (Ivan) McGlone has been there since back in the ’70s. They don’t do anything fancy. They’re going to trap and power the ball at you. We just have to buckle our chinstraps and get ready for a dogfight.”

In last week’s 45-10 rout of Greenup County, the Red Devils Troy Huffine ran 12 times for 86 yards and had one reception for 60 yards and a touchdown.

Bronson Korzep scooped up a fumble on the second play of the game and returned it 20 yards for a score to trigger the first half onslaught as Russell built a 39-0 lead.

“Their running backs impress us. They have some size and run hard. We know what Hayes is capable of because he hurt us playing quarterback last year,” said Vass.

“They have some good size on the offensive line and they block well. Their ends are about the same. Good size and block well. Their quarterback has a good arm and he can throw on the run. They’re a very nice team.”

Defensively the Red Devils are strong up front and make it tough for opponents to move the ball.

“They have good size and play hard. Their linebackers did a nice job against Greenup and we thought their ends were good players. And they have some good athletes in the secondary. They’re a solid defensive unit,” said Vass.

Campbell and Kennedy are the ends with Bevis the nose guard and Adkins and Scaggs the tackles.

TICKETS SALES: Tickets for the Ironton at Russell game are $5 and will be on sale in the auto shop office during school hours until 2 p.m. Friday. Kickoff is 7:30.