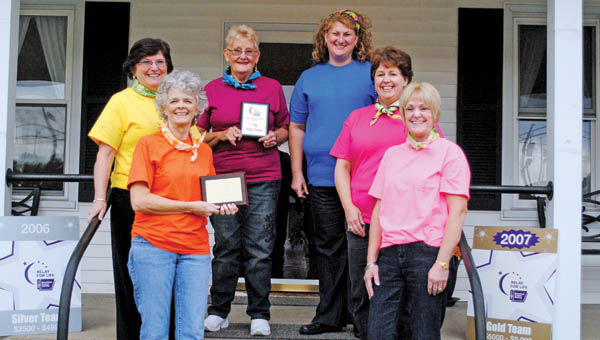 Relay for Life is a worldwide, team event to raise money to fight cancer, as well as to bring awareness to the disease, honor those affected by it, and assist those who have it.

PROCTORVILLE — The Proctorville Relay for Life doesn’t happen for another seven months, but that doesn’t keep this nine-member team from staying busy for this cause that is near and dear to each of their hearts.

This will be the 10th year the team, the Colorful Cuties, has participated in Relay for Life.

Relay for Life is a worldwide, team event to raise money to fight cancer, as well as to bring awareness to the disease, honor those affected by it, and assist those who have it.

The Colorful Cuties women became involved as a group when a member asked for people from the Proctorville Woman’s Club, a volunteer organization, to join her.

“One thing about these ladies in the Woman’s Club is we volunteer,” said member Helen Galligan. “I just said, ‘Who would like to help?’ and I had 10 ladies volunteer. That’s how we roll.”

Six of the nine members of this year’s Colorful Cuties team are cancer survivors, while others have had family members affected by cancer.

Galligan said that’s why they feel it’s so important to stay involved.

“Because we have so many survivors on our team, we know what it‘s like to have cancer,” Galligan said. She added that the money raised stays in the area. “I had Non-Hodgkins Lymphoma. I like to think the money we raised went to the kind of treatment that helped save my life.”

Team-member Dorothy Castleberry remembers the difficulty her family faced when her 12 year-old daughter was diagnosed with cancer. She said it took a year before they finally received the diagnosis, in 1968.

“They have come so far,” Castleberry said, thankful for the way research has improved the diagnosis and treatment of the disease.

The current fundraiser the team is working on is an open house, featuring ‘31’ products for sale. The fundraiser, sponsored by ‘31’ consultant Kari Shumaker, is Tuesday from 6 until 8 p.m., and open to the public. The team said 20 percent of the order total goes to Relay for Life, and the gifts received as hostess incentives will be raffled off to raise even more money.

One of the highlights for Galligan over the years was the year the Colorful Cuties was asked to lead the survivor’s lap at the Relay for Life event.

“That was really special,” Galligan said.

Team-member Mary Stephens said participating in the Relay was tough for her in the beginning, with the pain of losing family members to cancer, and seeing other family members suffering from cancer as well.

“It took me a long time before I could do it,” Stephens said, her eyes tearing up as she talked about it. “Once I did it, it was okay.”

At the Relay, luminaries are placed around the track in honor of those who have been affected by cancer.

“The Cuties buy luminaries in honor of each other,” Stephens said. “To know people are thinking about you, it’s an appreciative moment.”

There is still time for new teams to form, and the Colorful Cuties would encourage anyone thinking about doing it to get started.

Galligan is hopeful the funds raised will make a difference.

“I just hope for research, early diagnosis, education about cancer,” Galligan said. “I had probably had it for a while and didn’t know it because I didn’t know the signs.”

Boren volunteers to switch from fullback to linebacker