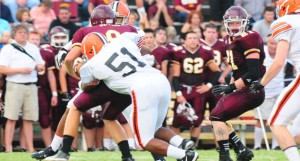 It’s week 10 and things are still a bit hazy, but a lot clearer than in most seasons.

Ironton (6-3) is second in Region 15 of Division IV with a 20.1056 average and has clinched a home game as well as second place. Although Ironton does not play on Friday, it will get an average.

Harrison Central, Zane Trace, Hamilton Township, Unioto and Bellaire are the favorites. The projection would be Harrison Central and Unioto as the final two qualifiers, but Martins Ferry could still slip in even with a loss.

Coal Grove (5-3) has inched its way back into the playoff picture in Region 19 of Division V, but the Hornets need a lot of help.

The Hornets — ninth with a 9.0421 average — will get very little help with a win over South Point.

Coal Grove needs Nelsonville-York to lose against Athens (8-1) on Friday and hope that the right Buckeye opponents stumble. Even if N-Y loses, it could still edge out the Hornets.

In Region 23 of Division VI, Symmes Valley clinched a playoff spot with its win over Portsmouth Notre Dame.

If the script goes as expected, the Vikings would play at Trimble in the first round.

The final ratings and playoff pairings will be announced on Sunday. The top eight teams in each region of all six divisions qualify for the playoffs.

O’Brien focused on Buckeyes, not birthday