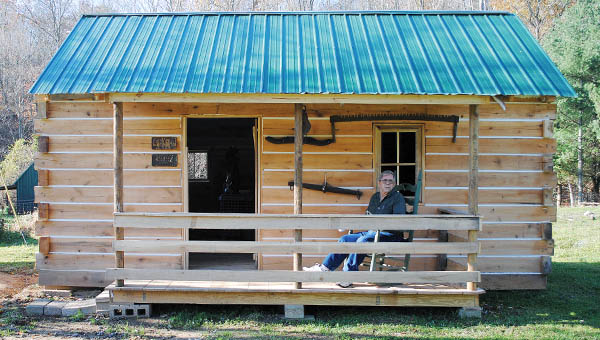 Bob Hanshaw, of Leatherwood, relaxes on the front stoop of his homemade cabin. The structure took six weeks to build and gives visitors a taste of what life was like before modern conveniences such as electricity.

Just out State Route 243 in Leatherwood, past Deering, is the ultimate version of an old-school man cave.

Bob Hanshaw, 69, has been building things for most of his life. His latest project is the log cabin beside the house he shares with his wife, Dottie.

“She hasn’t put me out yet,” Hanshaw said with a laugh.

The entire cabin, which Hanshaw built in about six weeks, is made of poplar wood, and is just big enough for the basics. The main living space has room for the wood-burning cook stove, an antique cabinet, a small table and an old church pew cut down to size. The adjacent room to the right serves as a bedroom, with enough space for the twin bed, a chest and a slop jar.

Antique touches are throughout the cabin, including a washbasin, a tin cup and vintage hats.

The laundry room is simply a washboard beside the cabinet.

The windows of the cabin let in enough light, but in the evening, kerosene lamps do the trick.

“I didn’t want to put electricity in it,” he said. “I like the old ways. I’d like for the younger people to see what the other people had to live with.”

The porch of the cabin is where Hanshaw spends the most time.

“I like to sit out and drink my coffee,” he said. “Kind of get away from everything.”

Beside the doorway, two vintage license plates hang. One from the year he went into service with the Coast Guard, and one from when his time with the service was over.

In addition to the cabin, Hanshaw built a smaller one beside it, made of landscaping timbers, which he uses to house his antiques and tools. He has also built furniture and even another house he had planned for his family but decided to sell instead.

He has built and flown three airplanes as well, one of which was shown during the Anti-Drug Air Show in Huntington, W.Va., in 1993.

Hanshaw’s son, Shane, has inherited his love for building. For Shane’s birthday, Hanshaw told him to buy the material to build a canoe, but Shane made sure to get enough material for both of them.

“I’ve taken it to Vesuvius, fishing and paddling around out there,” Hanshaw said.

Since retiring in 1993, after working for nine years with Collins Career Center and 25 years with the Lawrence County Engineers’ office, Bob will sometimes spend five hours a day building some project or another, but Dottie doesn’t mind at all.

“He’s close by,” she said. “If I need him for anything, he’s always right there.

Hanshaw isn’t quite finished. He plans on finishing a chimney for his cabin, and completing a loft above the bedroom area.