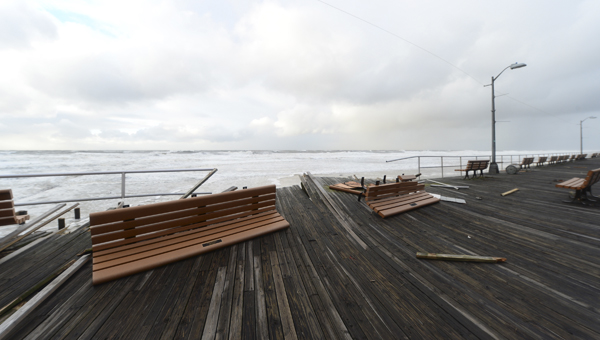 (MCT)— Floods and fires, seawater surges and electrical outages, fierce rains and lashing winds continued to pummel parts of the Northeast as Sandy continued its destructive march on Tuesday.

From Chicago to the Atlantic Ocean, through major cities including New York, Philadelphia and Washington, the impact of the storm continued to grow. Transportation systems in New York and New Jersey were crippled. More than 16,000 airlines flights have been canceled.

Sandy continued to generate wind gusts up to 80 mph and to dump up to a foot of rain and as much as 2 feet of snow in some areas. Many residents in coastal areas woke to both nasty winds and flash flooding from record surges pushed by the winds, high tides and a full moon.

At least 33 deaths were reported in seven states, according to the Associated Press. Of the dead, at least 10 were in New York City _ and three of the victims were children, one about 8 years old. As many as 7.5 million people had lost electrical power from New England through the mid-Atlantic states and from parts of the Midwest, including Ohio, to the populous Northeast.

The financial toll, including losses from people who heeded officials and skipped work could reach $20 billion, according to some insurance estimates.

The National Oceanic and Atmospheric Administration categorized Sandy as a cyclone that was about 90 miles west of Philadelphia and moving west.

When Sandy arrived, it merged with a winter system from the West and both were fed by cold air from Canada, creating what many dubbed a “super storm” whose impact was felt across an area more than 1,000 miles wide. Waves crashed in Chicago and trees were toppled in Connecticut. Rainfall was as high as 11.5 inches in Wildwood Crest, N.J., while snowfalls of 1 to 2 feet were reported in West Virginia.

New York was especially hard hit, with Wall Street shut for a second day, though there were hopes it could reopen by Wednesday. Schools remained closed. President Barack Obama declared a major disaster in the city, New Jersey and Long Island, where hundreds of thousands of people were without power.

New Yorkers awoke to scenes of destruction, from blazing fires in Queens to streets still wet from detritus left by a 13-foot surge of seawater, three feet above previous records.

More than a quarter-million people in Manhattan alone were without electricity, many because of an explosion at a ConEdison substation. There was an air of siege in Manhattan where nearly all bridges and tunnels to the outlying boroughs and to New Jersey were shut down.

The city’s subway system, parts of which are more than a century old, remained closed for a second day with no indication when it would reopen. Early Tuesday, waters that had swamped cars and some neighborhoods had receded, but city officials said the resulting damage to the below- and above-ground transportation system appeared to be extraordinary.

“It has never faced a disaster as devastating as what we experienced last night,” the Metropolitan Transportation Authority chairman, Joseph J. Lhota, said Tuesday as he tried to address questions of when the transit lifeblood of the city would again flow.

Lhota said the storm had “wreaked havoc” on the entire system and had flooded at least seven subway tunnels. Tracks of the Long Island Rail Road and the Metro North were blocked by fallen trees and other debris. Photographs taken at the height of the storm surge showed subway stations with water as high as the train platforms and gushing through doorways and around the turnstiles through which passengers swipe their metro cards.

At least 10 deaths, many from falling trees, were blamed on Sandy in New York City. Additional deaths were reported on Long Island; in Westchester County just north of the city; and in Connecticut, where two were reported killed.

A huge fire destroyed between 80 to 100 houses in a flooded beachfront neighborhood known as Breezy Point in Queens. More than 190 firefighters contained the blaze but were still putting out some pockets of fire more than nine hours after it erupted. Video footage, replayed throughout the morning, showed tightly packed homes fully engulfed in reddish flames.

Firefighters told WABC-TV that the water was chest high on the street, and they had to use a boat to make rescues. They said in one apartment, about 25 people were trapped in an upstairs unit, and the two-story home next door was ablaze and setting fire to the apartment’s roof. Firefighters climbed an awning to get to the trapped people and took them downstairs to a boat in the street.

Nor were emergency facilities spared. New York University’s Tisch Hospital was forced to evacuate 200 patients after its backup generator failed.

New Jersey was the first to feel Sandy’s wrath and continued to face huge problems Tuesday. Water swept through the small towns of Moonachie and Little Ferry, stranding hundreds of people. Officials said rescues were under way buy they were having trouble using boats.

The Jersey Shore, including Atlantic City, remained under water, without power and was “completely unsafe,” Christie said, reciting a litany of destruction, including homes, beach erosion and amusement park rides pushed into the sea.

“The level of devastation on the Jersey Shore is unthinkable,” he said.

At its height, more than 3 million people in New Jersey, Pennsylvania and Delaware were without power. Working through the night, crews restored power to 200,000.

Pennsylvania Gov. Tom Corbett, asked by a reporter Tuesday morning whether the state had “dodged the bullet” compared to more extensive damage in New York and New Jersey, replied: “Anyone without electricity is probably not saying we dodged the bullet.”

“We don’t have a coastline. That’s what helped us considerably,” he said.

Pennsylvania was moving to recover, as was the nation’s capital and Virginia. Officials were watching flooding from the Potomac River and widespread power outages after Monday’s heavy rain broke an 1885 record in the District of Columbia.

Federal offices remained closed Tuesday, but the Washington Metropolitan Area Transit Authority reported that it would be restoring bus and rail service Tuesday afternoon. Reagan National Airport recorded 3.85 inches of rain on Monday, breaking the Oct. 29 record of 2.69 inches for the Washington area, set in 1885. While rain was still falling in the D.C. region, the winds have eased considerably.

More than 16,000 flights have been canceled nationwide and officials predicted it could take as much as a week to restore full service.

In Baltimore, fire officials said four unoccupied row houses collapsed in the storm. Maryland had about 321,000 people without power Tuesday morning, according to Ed McDonough of the Maryland Emergency Management Agency.

“While we’ve still got some issues, it’s not as bad as we were anticipating it could have been,” he said. “We were concerned we might have as many as a million power outages in the state, and we have about a third of that.”

About 360,000 people in 30 Connecticut towns were urged to leave their homes under mandatory and voluntary evacuation orders, officials said.

A house on Kenwood Road in Garden City, New York, is leveled to the ground from an explosion in the... read more