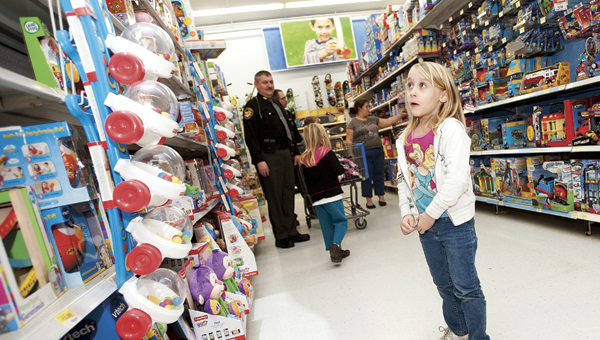 Five-year-old Lola Douglas browses the aisles of toys at Walmart Monday during the Shop with a Cop event.

Carefully selecting a Lalaloopsey doll, Diva was unaware of the financial and emotional strain felt by her family.

“We don’t have it real easy,” said Diva’s mother, Diana Justice. “She has arthritis and we spend a lot of time at the children’s hospital (in Columbus).

But Monday’s Shop with a Cop spree was just what the doctor ordered for Diva.

As Diva enthusiastically picked out her Polly Pocket figurines, Justice said the opportunity for her daughter to participate “meant the world” to her.

Having only been with the OSHP since August, Lloyd said he felt a strong urge to volunteer for the event.

“I think it’s a great thing,” Lloyd said. “And hopefully it can become bigger in the years to come.”

This year 34 children were able to shop alongside some of Lawrence County’s law enforcement officers from various agencies. An additional child was even added the night of the event, a tagalong who came with another family.

Smith said so many children were able to participate due to the fundraisers of the multiple agencies, as well as a matching donation of $3,000 from a “Secret Santa.”

The names of children and families in need were collected by the Lawrence County Sheriff’s Office and OSHP from local schools, churches, health department and children’s services.

Not only does the event give children a chance to get what they want and need for Christmas, Smith, as well as other officers, said the experience paints officers in a more positive light.

“For a lot of kids, their only experience with law enforcement is a bad experience,” he said.

“It shows that we do have a sensitive side to law enforcement,” Cartmell said. “That we do care about the children in our community.”

“It was very nice of them,” said the boy’s father, Mark Sr.

For Stephanie, it was her first year helping her father with the event.

“I love it,” she said. “I love seeing the little kid’s see all their presents.”

“I want them to see they are lucky for what they have,” Cartmell said. “That those kids don’t have everything they have.”

In the case of 6-year-old Marcus Richendollar, his family lost everything to a house fire last year, and times are still tough. His sister Brittany Worthington made sure he got what he needed, as well as some toys to make Christmas a little brighter.

Marcus picked out his Hot Wheels and wrestling action figures alongside Lawrence County Adult Probation Department officer Teresa Bond, who was helping for the first time this year.

“I’m having fun,” Bond said. “Marcus was very easy to shop with.”

After the shopping sprees, the children and their families were treated to pizza and a visit by Santa at the South Point Giovanni’s.

City of Ironton loans equipment for project   CHESAPEAKE — With a little help from a neighboring city, the Village... read more