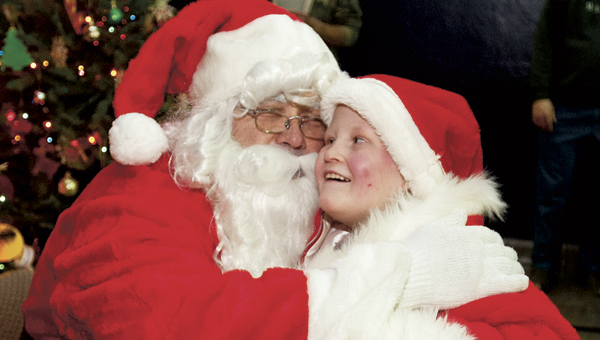 Gabby Abrams, her light brown hair falling onto her shoulders, kept her eyes focused on her teacher and music director, Kali Enix, waiting for her cue.

When it did come, Gabby let the two yellow bells in her hands ring out with the spirit of Christmas throughout the auditorium at the Open Door School.

Gabby and her fellow Bell Choir members were one of the first on Wednesday’s program at this year’s school Christmas show performing two of the season’s classic songs, “Silent Night” and “Rudolph the Red-Nosed Reindeer.”

“We practiced three times a week,” Enix said after the show. “They love the music. It is a different way to express themselves.”

The holiday season is a busy time for the school’s Bell Choir as it performs at a variety of venues throughout December. But this year was different as the choir was donned in their new uniform of iridescent vests, white shirts and black pants.

The students played to a standing-room-only auditorium that morning as they read poems, performed solos and danced.

Production numbers were “Santa Claus is Coming on a Boogie Woogie Choo Choo Train, “Santa Bring Me a Dinosaur” and “Rockin’ Around the Christmas Tree.”

Planning for the program begins just before Thanksgiving with practice until the day of program.

“This gives them the opportunity to speak out loud,” Kendra Heim, Open Door principal, said. “It provides social skills, entertainment and everybody has fun.”

CHESAPEAKE — While a temporary fix has helped the drainage problem along Rockwood Avenue in Chesapeake, a permanent solution is... read more