Making sure children always have something to eat 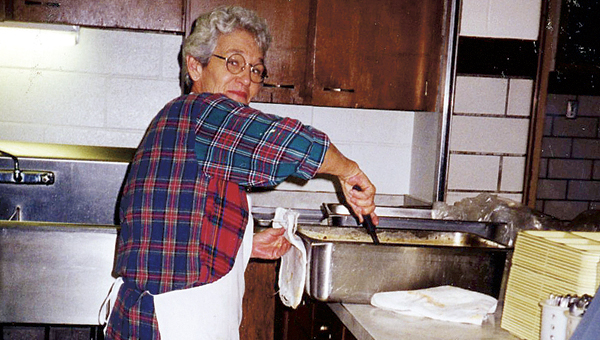 submitted Sue Williams, shown at the Whitwell school kitchen, is the inspiration for a fund to help feed children.

There was one place where Sue Williams knew she was meant to be.

“She hit her stride when she was in the kitchen, be it home or at school,” Jim Williams, her only son, said Thursday, one day after his mother died at the Community Hospice Care Center in Ashland, Ky.

From 1982 to 2006 Sue Williams was a cook at the kitchen at Whitwell Elementary where she fussed and worried over all the young students as they came through the line, making sure they had enough to eat and that the food was tasty and nutritious.

“She would doctor things up to help the kids to like things more,” Williams said. “She would add a little more butter here, things like that.”

Even when she left the school cafeteria in the afternoon, she was still cooking away to help out school or community groups with their fundraisers.

“She had kind of been the go-to girl when organizers were having a bake sale,” Williams said. “It was ‘Hey Sue, can you make a flat of those peanut butter bars.’ That and the hot dog sauce. For fundraisers for basketball, it was usually her sauce.”

But her concern for those students didn’t stop after they left the lunchroom. She worried about whether they had enough to eat when they weren’t in school.

Her son is learning more about what concerned his mother. Last summer Williams, the assistant principal at Ironton Elementary, read an article about a program started in Cincinnati that provided healthy snacks to children who are “food insecure.”

“Those who go home Saturday and Sunday and they don’t know if they are going to get a meal or what,” Williams said. “Teachers identify these students and the program collects those items, bags them up and asks the kids to come down and bring their back pack. It becomes their little stash to get them through.”

Williams knew there were children at Ironton Elementary who could be classified as food insecure and he wanted to start a similar program here.

First he presented the idea to his principal and superintendent, then Central Christian Church, where he is an assistant pastor. The church was glad to help out. Soon other churches joined the effort.

As he was starting to get the program off the ground, his mother entered the hospice.

“My mother always thought a lot of flowers at a funeral was a waste of money,” Williams said. “I presented the program to my sisters at hospice a few days ago. In lieu of flowers, can we do some funds for this new program. Let’s name it after mom. She was passionate about feeding children.”

His sisters agreed and Sue’s Kids was launched.

Now as the family prepares for their mother’s funeral on Saturday, they would rather people reach out to the Sue’s Kids fund that starting in January will be feeding students at a monthly cost of $12 a child.

“This was her. It was her character,” Williams said. “She was a doer. She never wanted to sit around and talk about something. She wanted to go do it. She wanted to be hands-on.”

“Mom would love to see this in her memory for the children,” Williams said.

Budget for 2013 approved;  next year’s revenue down   Revenue expected to come into Lawrence County for 2013 is down... read more