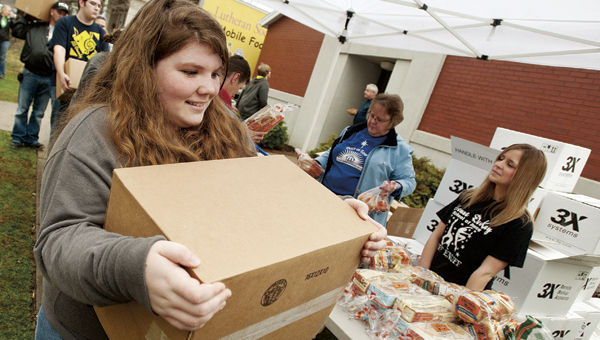 Rock Hill student Allyson Casey assists with the Christmas with Dignity event at the St. Paul Lutheran Church. In addition to Christmas with Dignity, National Honor Society students from Rock Hill have been giving back to the community with such efforts as the “rake and run,” peanut butter drive, wrapping presents for donations to Golden Kidz and more.

PEDRO — A cool autumn breeze plays with the fallen oak and poplar leaves in the yards off State Route 93.

This is Rock Hill school country and pride in place is apparent as a bunch of teenagers in jeans and faded shirts rake and rake on a Saturday afternoon until the lawns they are clearing for homeowners who can’t get out to do the work emerge with the dry, gray grass of November.

Fast forward about a month to Dec. 8 when, by 8 in the morning, a line has grown two blocks long from St. Paul Lutheran Church in downtown Ironton. That Saturday was the church’s annual Christmas with Dignity where this year, 25,000 pounds of food were given away to 650 families from the Tri-State.

Among the faces of the volunteers — young, not so young, men and women — are some of those same teens from Rock Hill, carrying hundreds of 40-pound boxes of ground turkey, canned green beans and the like from church yard to car trunk.

Shepherding the teens was Kim Zornes, a senior English teacher at Rock Hill, who recalled that day’s duties with an enthusiasm as vibrant as titanium burning off July 4th sparklers.

“You got to know that person,” Zornes said of those who stood in line to get just a few days’ worth of food. “The stories we heard in those four hours were heart-wrenching.”

Alone either activity shows the spirit of generosity and caring for others. Now multiply those activities by a factor of 20 and you have the resume of this year’s Rock Hill chapter of the National Honor Society.

“We tried to do the things that interested them,” Zornes, the society’s new Rock Hill adviser, said. “And a lot of these ideas came from them. We made it happen with no money.”

There was the “Ugly Sweater Day” when the teens donned their worst nightmare of a Christmas sweater and decked the halls at school, collecting money for the American Cancer Society. All the money collected was given in the names of those from the school who are fighting cancer or who have lost their battle to the disease.

“They needed peanut butter,” Evan Morris, an honor society member, said. “We had a goal of 30 jars. We made that the first day.”

Final tally to the food bank was 402 jars.

“You feel good to do this,” said Morris, who wants to study civil engineering at The Ohio State University.

Right now there are 17 members of the Rock Hill chapter of the national organization, established in 1921 in Pittsburgh, Pa., to recognize academic accomplishments and community service of high school students.

“It is a pretty stringent process to get in,” Zornes said. “They have to fill out an application.”

First requirement is scholastic. Every high school junior or senior who wants in must have a minimum 3.0 grade point average.

Next a faculty committee reviews each applicant’s extracurricular work to see if it meets the criteria of character, leadership and service. After acceptance comes a sense of satisfaction and a ceremony, then it’s down to the business of putting the needs of other’s first. The reward can be discovering worlds students never imagined existed.

“There are people who don’t have and I have never wanted,” Tommi Butler, another Rock Hill chapter member, said. “It is good to experience.”

Butler, who sees herself in a college of veterinary medicine in another four years, spearheaded the society’s clothing closet project, where special education children got to pick out new outfits, and the drive to collect hygiene items for a local women’s shelter.

“Women may be taken from their home and they don’t have anything there,” she said.

As is often the case, serving others has paid back substantial, although intangible, dividends to these students, Zornes says. She has watched them turn into leaders.

Her students know it is true.

Like Austin Kidd who shared in a school assembly earlier this month a poem his aunt had written to honor the victims of the Newtown, Conn., massacre.

“When I was a freshman, I would not have been able to stand up in school,” Kidd said. “I was shy and wouldn’t talk to anyone. Now with the experiences I have had with the honor society I’m not embarrassed or shy.”

Not only has Kidd become a leader, he has found his definition of leadership.

“It is going into something 100 percent and not backing down,” he said. “You know it will be tough. You give it your heart.”

For Amanda Beam, another honor society member, a leader is not afraid of being in the minority.

“Someone who puts himself out there without thinking of the consequences,” she said. “He takes a position and doesn’t care what he is going into. I’ve been in the past more introverted. I want to take a leadership role.”

As a new year starts for these young people, a new roster of service projects is also on the horizon from working in a soup kitchen to teaching good hygiene habits to elementary students at a dental clinic.

The Ohio State Highway Patrol will be out in force over the New Year’s holiday weekend as they plan for... read more