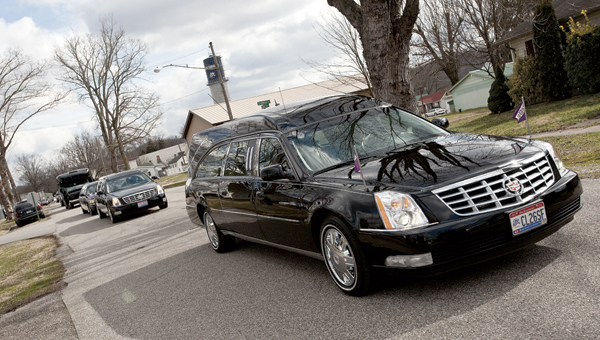 PROCTORVILLE — Bob Walters looked over at the stately white two-story house on the river side of Elizabeth Street and recalled all the times Ernie Hall Jr. helped him and his family in their time of grief.

For years that house was the location of Hall Funeral Hall, started by Hall Jr.’s father, the late Ernie Hall Sr.

Hall Jr., the second generation to own and operate the funeral home, died a week ago Sunday and Walters came out on a cold damp Saturday to pay his last respects to the man he admired.

Before his casket was taken to its final resting place at Miller Memorial Cemetery, a motorcade made up of family, friends, county officials and the hearse bearing Hall’s body made one last tour of the village he loved to be saluted by those who loved him in return.

“He was a people person,” Walters said. “He took care of my dad, my mom and my uncle, right over there. He took care of the whole family. He was a special man.”

A motorcade of more than 50 cars including cruisers from the Proctorville Police, Lawrence County Sheriff’s Office and Ohio State Highway Patrol escorted the hearse.

“He was a great man,” Melinda Moore said. “I knew him all my life. We used to push little Ernie in his stroller. I had a lot of respect for him.”

Many of those standing on Elizabeth Street put their hand over their heart when they saw the hearse. Man took off their caps. Some wiped tears from their eyes and waved to the Hall family as they drove by.

“He took care of my father,” Jeff Moore said. “He was a very nice person.”

On Friday the Proctorville mayor’s office asked that village residents come out and line the streets as Hall made his final trip through Proctorville.

By noon cars started pulling into a nearby parking lot to wait for the motorcade to arrive. Standing in the cold for almost a half-hour before the procession came their way, village residents shared their own memories of Hall. None seemed to mind the cold.

“He didn’t care if you had one dollar or a million dollars,” Walters said. “He would treat you with respect.”