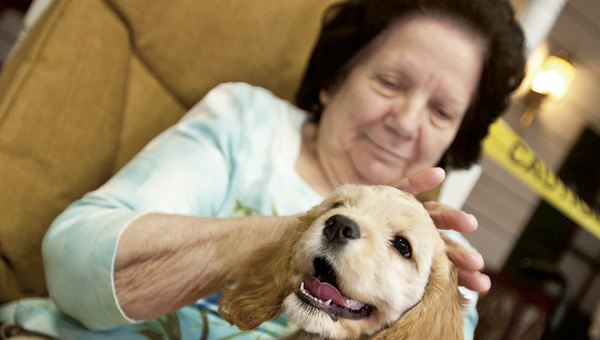 Jo Ann Porter keeps a soft but firm hold of a cocker spaniel puppy as she pets the dog during a pet therapy visit at Morning Pointe Ridge senior living facility Friday.

RUSSELL, Ky. — Memories of her own childhood pets came flooding back to Jo Ann Porter as she closed her eyes and held the tiny shih tzu close, feeling its soft, black and white fur on her face and smelling its warm puppy breath.

“We have always liked to have pets,” Porter recalled. “… I think they are sweet.”

Porter and other residents of the Morning Pointe Ridge Lantern Alzheimer’s Memory Care Center in Russell, Ky., gathered to play with the shih tzu puppy, as well as a cocker spaniel, Friday for their monthly pet therapy session. The pets were brought in by Petland of Russell and South Point.

“It decreases their stress and anxiety,” said Lindsay Brown, Lantern program director. “Their behavior can be so up and down. This can completely change their demeanor.”

Brown said the puppies offer a kind of sensory therapy. The residents can feel their different kinds of fur, smell the puppy breath and even sense the unconditional love a dog can give a human, making the residents feel calm.

“I like the furry ones to bring because it gives them comfort,” Kim Adkins said. Adkins works at the South Point Petland. “They give unconditional comfort, the animals do.”

Adkins said Petland has participated in the pet therapy program for a number of years at various nursing homes and senior centers, as well as schools and libraries.

“I love it,” Adkins said. “It brings tears to my eyes. Some (residents) act subdued. Then you put that puppy in their lap…”

Brown said and hour of pet therapy can set the tone for the entire day. Other residents of the center, and even some employees, like to watch the puppies chase after each other.

Mary Howard is a resident of Morning Pointe. She doesn’t have Alzheimer’s Disease, but Brown said the woman with failing eyesight rarely leaves her room and is depressed over the loss of her husband.

“She almost never comes out of her room,” Brown said.

As Howard sat on a sofa, she smiled from ear to ear as the puppies played at her feet.

“They are something, aren’t they?” Howard said. “They play so much without getting tired.”

In addition to the animals from Petland, Brown said a woman brings a large mastiff for the residents to pet once a month. Another person brings a standard poodle.

“The poodle will nudge their hand. It’s so sweet,” Brown said. “It’s like the dogs need attention as much as these people do.”

Families will visit their loved ones at Morning Pointe and bring pets from home. One Lantern resident even has a cat, which the other residents enjoy petting, Brown said.

Pet therapy, like the other activities the Lantern residents participate in, is aimed at giving the residents a meaningful day.

“The whole point is to give them a purpose everyday,” Brown said. “Even though they don’t have to feed the animals, it brings back memories from when they did that. Anything to give them a good time. Even if it is for just an hour.”